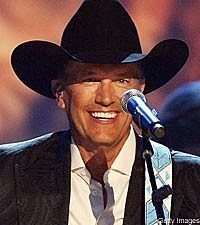 It's good to be the King. Country music's reigning monarch, George Strait, has just earned his 33rd million-selling album with 'Troubadour,' which now gives him the most platinum or multi-platinum certifications from the RIAA (Recording Industry Association of America) in country music. He also ranks third in all genres, right behind the Beatles and Elvis Presley.

There's more good news: Last week's CBS-TV special, George Strait: ACM Artist of the Decade All Star Concert, was the most watched show of the night, and the special helped spark a phenomenal 300% increase in sales for three of Strait's albums - 'Troubadour,' '22 More Hits,' and '50 #1's.'

King George's new single, 'Living for the Night,' is also the most added song at country radio this week. It's the first release from the highly-anticipated album, 'Twang,' which is set for release this fall.

And on Saturday, June 6, Strait headlines the inaugural event at the new Dallas Cowboys stadium, after selling out the massive venue in under an hour. Also on the bill are Reba McEntire, Blake Shelton and Julianne Hough.