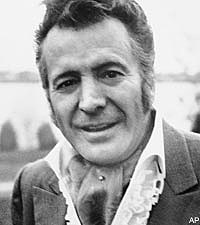 Members of the Country Music Hall of Fame in Nashville came together Sunday night to welcome two new members, Ferlin Husky and Billy Sherrill, into the prestigious circle.

Country music royalty mixed and mingled with friends and family during an invitation-only reception. It was an almost surreal setting for any observer watching George Jones and Vince Gill walk through the crowd, joining Bill Anderson, Sonny James, Mel Tillis, Ronnie McDowell or Barbara Mandrell, as groups of friends formed to chat and catch up.

Those celebrities walking the red carpet took time to speak with The Boot about the new inductees. "I can tell you this, you always wanted to open for Ferlin because you sure couldn't follow him," Bill Anderson told us.

Charley Pride, who Ferlin chose to induct him into the Hall of Fame, recalled the first time the two met. "We were in the Memphis airport, on our way to a show in Pensacola, Florida. After we got on the plane, I heard this big argument. I heard Ferlin say, 'Simon, I told you I wasn't gonna argue with you any more.' I looked over and there was no one in the seat beside him, so I just kind of hunkered down and didn't say anything to him the whole trip.

"We got to Pensacola, and he got in his limo and I took a cab to the show. We did the show and after it was over, Hank Locklin and Carl Smith told me about his alter ego, Simon Crum, which I didn't know about. After that, everything was alright and we did a bunch of shows together."

Vince recalled that Ferlin's hit 'On the Wings of a Dove' was one of the songs that was impressionable on him as a youngster. "There are just a few songs that do that, and it's lasted a lifetime." 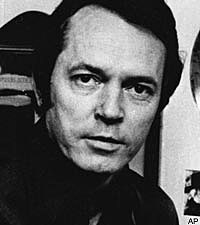 As for Billy, Vince voiced his opinion that with all that's going on today in country music, he wishes the new inductee was still producing records. "He had that combination of not only being a great record producer, but he was a great song man. He knew what made a great song, and he made great records out of them."

George Jones was also quick to praise Billy, who produced many of his hits, including 'He Stopped Loving Her Today' and 'The Grand Tour.' The singer said his wife Nancy and Billy stay in touch via texting and emails, exchanging jokes and keeping up with what everyone has going on. "He's a funny man if you get to know him. And I'll tell you one thing, back in his time he was a great producer. He deserves this award and we're tickled to death that he's finally made it in here."

George also toured with Ferlin in his early days in the business. "If anybody ever deserved the Hall of Fame, he does. He's done his share for country music, and (alter ego) Simon Crum has too. I hope Simon shows up tonight. I'm tickled to death for them."

Ronnie McDowell recalled that as a kid, Ferlin's hit 'Gone' was one of his favorite songs to sing. "I'd walk around the house trying to imitate him while I was singing the song," he said. "What a thrill it is to be able to sing for him tonight with the Jordanaires and Millie Kirkham, who were the original background singers on it."

Following the reception, the Medallion ceremony, which was the official induction into the Hall of Fame for Ferlin and Billy, featured numerous performers singing the hits made famous by the two men. Kyle Young, executive director of the Hall of Fame and Museum, spoke about each man's contribution to country music. Of Ferlin, he said, "In the mid-50s, Ferlin would create the template for the famed Nashville Sound, a sound that gave rock 'n roll a run for its money, and forever put Music City on the map. Multi-talented and musically versatile, Ferlin Husky was always ahead of his time."

Performers during the Missouri native's induction included Webb Wilder, who sang one of the singer's's early hits, 'I Feel Better All Over (More Than Anywhere's Else).' Ronnie walked off the stage and down to where Ferlin was seated, singing directly to him when he and the Jordanaires, along with Millie Kirkham, performed 'Gone.' They drew thunderous applause and a standing ovation for their performance.

Ricky Skaggs and The Whites performed Ferlin's trademark song, 'Wings of a Dove,' inviting the audience to sing along. Songwriter Dallas Frazier showed Ferlin's Dixieland side by singing a song he co-wrote with Doodle Owens, 'Freckles and Polliwog Days.' It was probably the first time a tuba was added to the country band in a Hall of Fame induction ceremony.

Charley welcomed Ferlin into the Hall of Fame after the bronze plaque was unveiled. Ferlin thanked all who had been involved in bringing him into this royal family of entertainers, saying, "There are so many people I admired since I was a child here in the Hall of Fame. I say with all sincerity, God Bless everyone who had anything to do with me getting here. Thank you so much."

Kyle introduced Billy by saying, "He wrote the book for modern country, and rides alongside Chet Atkins and Owen Bradley as one of country music's master craftsmen."

Craig Morgan was the first artist to honor Billy, stepping forward to perform David Houston's 1966 hit, 'Almost Persuaded,' which stayed at the top of the charts for nine weeks. Next up was Shelby Lynn, also a Sherrill protege, who performed the Tammy Wynette classic 'Stand By Your Man.' Billy produced a string of hits for Tammy, including 'D-I-V-O-R-C-E' and 'I Don't Want to Play House.'

Ronnie Milsap was a natural choice to sing Billy's No. 1 song for Charlie Rich, 'The Most Beautiful Girl.' "I can't believe I have to follow Shelby Lynn," Ronnie said when he came onstage. "What a great singer!" He paused a moment, the addressed Billy. "What an honor it is for me to be here to honor you. You have painted for all of us the soundtrack of our lives with the records you made."

The last performance of the evening was from Lee Ann Womack, who sang the George Jones classic, 'He Stopped Loving Her Today.' Hall of Famer Charlie McCoy joined the band, playing harmonica on the song, which George originally had not wanted to record because he thought it was too morbid.

Music executive Frances Preston welcomed Billy into the Hall of Fame. She pointed out that he was a man who did not like to be in the spotlight, adding, "Your work has made stars out of many people, but tonight it is your turn to shine."

On the red carpet prior to his induction, Billy said at no time in his career did he ever consider that he would be welcomed into the Hall of Fame. "There are too many of my heroes already here for me to put myself with any of those." When asked what his reaction was to finding out he was going into the Hall of Fame, he joked, "You mean after I woke up? I just figured it was something they gave you on the way to the graveyard."

After his bronze plaque was revealed and Preston officially welcomed him to the Hall of Fame family, Billy said, "There are a lot of people who help you get to this point and I'd like to thank four men who were very special to me." He then cited friend and fellow Muscle Shoals music pioneer Tom Stafford, music publisher Al Gallico, CBS Records executive Clive Davis and Sun Records founder Sam Phillips, all of whom had major roles in encouraging him and helping establish him as a creative force in Nashville.

Two more inductees, Jimmy Dean and Don Williams, will be honored on October 24 in a second ceremony at the Country Music Hall of Fame.