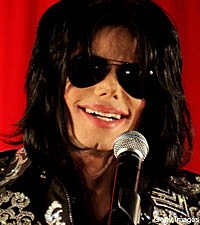 He was the King of Pop, but Michael Jackson's influence crossed all genres. The Boot has gathered reaction from country stars on the passing of a music legend.

"I will remember Michael Jackson as the kid that overcame, as the
mesmerizing, moon-walking worldwide artist. He was forced to fill shoes that must have been crippling to walk in, but yet MJ found a reason and a way to dance in them like no one on earth." -- Rodney Atkins

"He was larger than life. He's an artist that has had an impact on every other artist, consciously or subconsciously. Musically, he helped to change the world, and his records will live on forever." - Miranda Lambert

"I am so sad to hear this news. I am a huge Michael Jackson fan ... I grew up listening to him. I used to moon-walk down the hallway in school when I was in the sixth grade ... We have now experienced a day like my mom explained to me the world experienced when Elvis died." -- Jimmy Wayne

"'Thriller' was the first album I ever bought with my own money. Michael Jackson was truly a pioneer." -- Joe Nichols

"I am shocked and saddened by the passing of Michael Jackson. He was the most memorable and impactful entertainer on me as a child. My parents had Elvis to watch and adore. I had Michael Jackson. There will never be another person to sing and dance like Michael Jackson." -- Luke Bryan

"Even country boys like Jay, Gary and myself ... I count it as a blessing to have been inspired by his music and his artistry." -- Rascal Flatts' Joe Don Rooney

"Michael Jackson's music knew no boundaries and has greatly influenced entertainers from all musical genres. There is no denying that his impact was global and he was loved by people all over the world. I truly believe he was this generation's Elvis Presley. In fact, the parallels in their death, are uncanny ... I recently introduced my children to his music and the groundbreaking "Thriller" video. It's something we have all danced around to in our living room and have enjoyed together as a family. There's no doubt that his musical legacy will live for generations to come." -- Jason Michael Carroll

"A sad day for the world of music." -- Reba McEntire

"Rest in peace, MJ. You made a musical impact on my life like any other. You will be missed by many. Live on through your music." -- Josh Gracin

"Say what you want about his personal [life], he was one of the reasons I wanted to be a performer ... He was the first album I ever bought, first concert I ever went to, the first song I ever learned and my first crush." -- Rissi Palmer

"His was a rare talent that we witness once in a lifetime. One who makes such an indelible mark that for generations singers and dancers attribute him as inspiration. I had the great privilege of watching him every night doing what he did best -- entertain. I am grateful to have known him for the two years I worked for him, and will mourn his loss with his many millions of fans across the world." -- Sheryl Crow (who used to sing backup for Jackson)