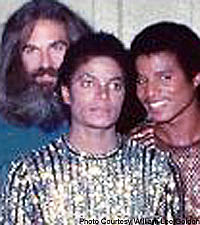 The Oak Ridge Boys' William Lee Golden not only met Michael Jackson, he was serenaded by him. Upon hearing of the King of Pop's death on Thursday, Golden shared memories of their 1981 meeting at Nashville's Municipal Auditorium, where The Jackson 5 surprised Golden with a cover of the Oaks' biggest hit.

"The Jacksons were on the top of their game that night," Golden recalls. "They were incredible singers and dancers. Michael had an exceptional talent that shone the brightest. Backstage I was able to meet them all. They were very gracious. At that time, 'Elvira' was at the top of the pop charts, and to my surprise they sang 'Elvira' to me and my sons. It was an evening we will never forget."

"I was amazed to watch him over the years as he accomplished even higher achievements and became one of the world's greatest entertainers," says Golden. "Michael stood out as a fantastic talent. He had the whole ball of wax -- not only a great voice, but the ability, flexible ability, and dancing."