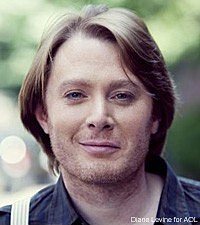 Since placing second on 'American Idol' back in 2003, Clay Aiken has been making a big name for himself in the pop world, but was he really meant for country?

Rather than working with modern Top 40 material on his latest album, 'Tried and True,' the singer delved into classic tunes from the '50s, many of which his mother encouraged him to perform before he was famous. One album track in particular stands out to him: 'Unchained Melody,' written in 1955 but made a hit again when LeAnn Rimes covered it in 1997.

"'Unchained Melody' was a song that my mom always wanted me to sing. She always dreamed I would record it and be a big star because of it and go to Nashville and make it a big hit," Clay tells The Boot. "And then LeAnn Rimes did the same song and recorded it, and had a big hit with it, so there went that dream! [laughs]"

Clay clearly paved his own way despite missing out on a Nashville-born career, but LeAnn isn't the only country connection that he has. Thanks to his mom, a music lover who often sang to him and was even in a local band during Clay's childhood, he was introduced to a lot of the standards that he wound up recording for 'Tried and True.' Besides his 'Unchained Melody' story, Clay also attaches early family memories to Conway Twitty's 1958 single, 'It's Only Make Believe.'

"My mother also loved country music, so Conway Twitty was somebody that I remember specifically going to visit his house in Nashville, on the Nashville home tour. 'Only Make Believe' has a special place [to me], simply knowing that's where we went on vacation when I was younger," Clay says.

As for his musical influence on his own son, two-year-old Parker, Clay tells Popeater, "For the most part, around the house, we don't have that much music playing. For some reason, I'm nervous to sing for him ... My son doesn't like to listen to me sing, but he enjoys listening to other people sing. Maybe kids just don't like to hear their parents, ever! When they're teenagers they don't want to hear them, when they're babies they don't want to hear them sing. Maybe it's just a genetic thing."