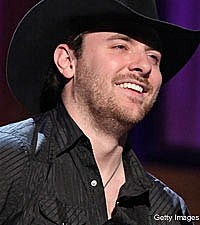 Chris Young's current three-week No. 1 song, 'The Man I Want to Be,' could very well be used to describe his new EP, 'Voices.' The singer recorded three classic tunes by some of his musical heroes; Vern Gosdin's 'Chiseled in Stone,' Keith Whitley's 'I'm Over You' and John Anderson's 'Swingin'.' The release is an all-acoustic digital album, available exclusively for download on iTunes this week.

Ironically, Chris' next single is titled 'Voices,' and comes from his current album, 'The Man I Want to Be.' It may be a bit confusing, but one of the reasons he felt the title would be a perfect fit for his EP was because these were the "voices" who inspired him. "If you go through a list of some of my favorite artists, these guys are at the top," Chris tells The Boot.

In a cool twist, the Tennessee native found out the song was written by the same person who also co-wrote his current single, 'The Man I Want to Be.' "It's so funny because I was playin' down in Mexico [and] I was doing this songwriters' thing, and Tim Nichols, who's actually one of the writers of 'The Man I Want to Be,' was playing with me, and he started playing this song. I said, 'Man! I love that song.' And he goes, 'Yeah, it was my first cut.' So, here's this guy that I'm a huge fan of, and I just cut his song, and now I got a chance to cut another one of his songs."

Another of Chris's favorites is Vern Gosdin's classic, 'Chiseled in Stone,' and he has some strong words of advice for any aspiring country singer. "When you get to Nashville, if you move here from somewhere else, or if you're living in Nashville like I did, and you're growing up and start learning cover songs, that's ... just one of those songs that you have to learn how to play," Chris states. "If you don't know the words to 'Chiseled in Stone,' I don't know if you can go play downtown Broadway in Nashville."

And while it might be the last track on the EP, John Anderson's 'Swingin',' is one of the first Chris ever learned to play. "John Anderson was another one of those guys that I just always loved," he shares. "I loved his voice. I loved his song selection... But this song, for whatever reason, has always stuck out in my mind. It was one of the first John Anderson songs I actually learned to play on guitar. As many times as I have played this live for tips somewhere on stage and [in] my show here recently, I just never get tired of that song."

Chris will be in Nashville on Thursday to perform on the Grand Ole Opry at the legendary Ryman Auditorium.