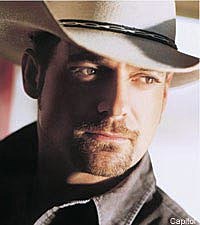 Chris Cagle fans will soon have a greatest-hits package from the singer, to be released by Chris' former label, Capitol Nashville. The 15-song 'Best of Chris Cagle' CD, due Feb. 9, will feature tracks from his four studio albums, including the hits 'My Love Goes On and On,' 'Miss Me Baby,' and the No. 1, 'I Breathe In, I Breathe Out,' along with Top 10 singles 'What Kinda Gone,' 'Chicks Dig It' and 'What a Beautiful Day."

In recent years, Chris has been spending time away from the spotlight, regrouping after battling with legal issues including a domestic violence charge, of which he was found not guilty, and assault charges stemming from a fight outside an Arizona night club in Dec. 2007. That charge was later dropped and Chris agreed to attend anger-management classes.

Chris is currently back in the studio working on a new album, with a label and release date to be determined.