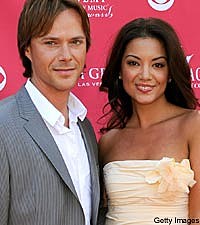 Bryan White and his wife, actress Erika Page, are doing an admirable job balancing two careers and two young sons, Justin and Jackson. Bryan is now on a long radio tour promoting his new album, 'Dustbowl Dreams,' while Erika has been focusing on her family since leaving the daytime soap 'One Life to Live' ... although she worked briefly on 'Days of Our Lives' last year and plans to film a drama entitled 'The Singing River' this year.

Given her line of work, which sometimes requires doing steamy love scenes, it wouldn't be surprising if Bryan received a visit from the green-eyed-monster from time to time, but the singer says that's not the case.

"No, I don't get jealous," Bryan tells The Boot. "I don't see any reason for me to watch [those love scenes] so I don't choose to watch it. When I get to a point like that, I kind of know it's coming, I'll flip to another channel. One time we were working on vocals, and we took a break and turned on TV, and there was my wife in a steamy love scene, and we all looked at each other and went, 'Wow!' and just turned it back off. We said, 'Maybe we should just get back to work.'"

Bryan and Erika, who will celebrate 10 years of marriage in October, make an effort to keep their love alive without taking each other for granted.

"We try to shake things up and keep surprising each other," Bryan explains. "Life can become mundane and just feeling like you're going through the motions sometimes. For one, with our kids, there's never a dull moment. But, we have to take time to go do fun things for us. So we make a strong point to get a babysitter."

For Bryan and Erika, a night out doesn't have to be glamorous. Sometimes simple fun is best. "We take time to do something fun together -- which is just going out and grabbing a bite to eat. We're nerds too. Sometimes we'll go to Borders with a cup of coffee, and we'll just grab a pile of magazines and sit in a corner. I think that's the important thing -- shaking it up and making sure you're spending quality time with each other. Because sometimes you can feel like you're just passing each other in the hallway doing all the stuff we've got to do. You've got to stop and look up."