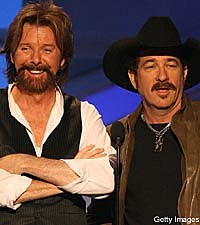 "We both feel like it's just too good a horse to ride it into the ground." -- Kix Brooks

Brooks & Dunn are explaining to fans why they're calling it quits after more than 20 years of churning out hit after chart-topping hit. The duo sat down with CMT to discuss the news that has rocked the country music world this week.

"Nothing lasts forever," Kix tells CMT's Katie Cook. "We've had this process of making records and getting ready for tours year after year ... When we were going through, trying to get an album together this year, putting songs back and forth and the push and pulling, it hit us both -- We've done all kinds of music you can think of, done every way we could think of doing it for 20 years ... We've worn this thing every way we know how to wear it! We realized at that point, this may be it ... So how do we wrap this thing up? What's the classy, right way to do it? That's what we're focusing on now -- a great tour, and we're gonna call it Last Rodeo .... We're going to relive 20 years of whatever the heck we've been doing!"

Kix and Ronnie don't deny they are completely different people. But they insist speculation that it was those differences that drove them apart is simply untrue.

"Differences, over the long run, are what make it work," says Ronnie. "You've got to have that room. Neither one of us are breathing the other's air."

The duo will release their final album together, '#1's and Then Some,' on Sept. 8. After a dozen studio albums, CD sales of more than 30 million and countless industry awards over the past two decades, what do they hope will be Brooks & Dunn's legacy?

"Only time will tell," says Ronnie, joking, "I don't even know how to spell legacy!"

"We have pretty big heads, but I don't thing even our egos are quite ready to go there," adds Kix.