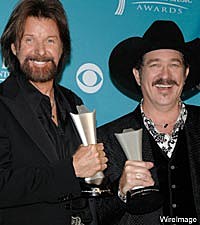 "Thank you so much! What an amazing 20 years we've had, thanks to y'all. We really appreciate it," said Kix Brooks upon accepting Vocal Duo of the Year, then joking, "We're currently in therapy with Bret Favre, figuring out how to waffle on this. It's very touchy, very difficult, very sensitive.

"There are way too many people for me to thank, and I know Ronnie feels the same way," Kix continued. "The fans of country music, we're going to be out there all this year saying thank you. We hope you'll come party with us, because you've given us the dream that every musician dreams of. Thank you so much, this has been an amazing, dream experience."

Brooks and Dunn are calling it quits after two decades together, but not before heading out on their Last Rodeo farewell tour, which starts this week.

The legendary duo will also be honored by the Academy on a special 'Brooks & Dunn: The Last Rodeo' televised concert, set to air May 23 on CBS. It will be filmed in Las Vegas this Monday (April 19) and will feature performances by Carrie Underwood, George Strait, Lady Antebellum, Jason Aldean, Taylor Swift, Rascal Flatts, Sugarland and several other big country stars.

Categories: ACMs
Comments
Leave A Comment
Back To Top