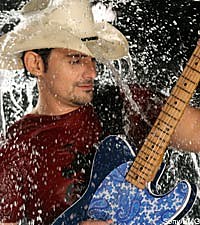 Ticket buyers beware: Attending a show on Brad Paisley's H20 World tour may spoil you for all other concerts ... and festivals ... and perhaps even Disney World.

Combine multi-media entertainment with sets by Brad, Darius Rucker, Justin Moore, and other world-class musicians, mix in midway games and contests, add tasty foods and beverages, and you have the recipe for Brad's latest tour. As if that isn't enough, the tour is tied into raising funds for 'Hope Through Healing Hands,' a charity Brad supports, to bring clean drinking water to impoverished areas.

Even a driving rain during the May 22 show in Bristow, Va., – which prompted Justin to comment from the main stage, "I think we might have overdone it with this water thing" – didn't dampen anyone's spirits.

That was especially true of Brad who lost millions of dollars in gear and equipment during the Nashville flooding. Not only did he laugh off the bad weather but waded into it, at one point taking a seat on a back riser near the rain-soaked lawn ticket holders.

"I can't thank you enough," Brad told the Washington, D.C.-area crowd. "It means so much to us that in these hard times we live in that you would spend your hard earned money to spend the day with us. I just want to make sure you get your money's worth."

Music by Steel Magnolia, Corbin Easton and Josh Thompson filled the air for more than two hours prior to the main stage show as many attendees happily munched waffle cakes, drank beer, played with the fishing simulator, joined in a chin up contest and played volleyball.

The audience's joy hit a high point when the theme song from the movie 'Jaws' filled the amphitheatre and a guitar head stock, simulating a shark, was seen in virtual water. The video shifted to show Brad brandishing the guitar and -- poof -- soon there he was climbing up a pool ladder out of the virtual water tank and walking onto the stage to sing 'Water' accompanied by his band.

What followed was a two-hour set that included an array of special effects and videos – everything from the classic truck-through-the-mud video footage as Brad and his band played 'Mud on the Tires,' to simulated images ranging from portable toilets to Chinese Food signs during 'American Saturday Night,' to the video of a Brad charicature running from fans as he and his band played "Celebrity."

Perhaps one of the more touching moments of the show was the footage of Brad and Andy Griffith, star of 'The Andy Griffith Show' and 'Matlock,' on the video for 'Waitin' On a Woman,' which played on the big screens.

Many of the teens in the all-ages crowd likely didn't realize that besides his role as a legendary actor, Griffith has been a life-long promoter of mountain music. The crowd's good natured buzz during the video presentation -- which gently paid tribute to Griffith's musical roots as a video of the two singing Griffith's long-time theme song 'Fishin' Hole' -- showed all the ticket holders had at least cursory knowledge of the man who famously played 'Sheriff Taylor.'

Justin's set opened the main stage and also offered many nods to the U.S. and musical heroes. The fun-filled, hour-long set included a poignant rendition of 'Grandpa.'

Darius Rucker's hour-long set -- which included a video introduction by pro wrestler Ric Flair -- also had a mix of amusing and sentimental moments. Highlights included Darius' renditions of 'Forever Road,' 'Learn to Live,' and a cover of Prince's 'Purple Rain.'

Despite the extraordinary performances, the audiences hearts' clearly belonged to Brad. who spoke movingly of his uncomfortable teenage years, even showing photos of himself as a member of the high school "Class of '91' and talking to the younger members of the audience before performing 'Letter to Me.'

"This reminds me so much of my high school times," Brad told the crowd of watching concerts while standing in the rain at large venues. "I was 17 and scared to death. People would say 'Son, enjoy these years. They are the best of your life.' I was thinking 'If that's true, just kill me now.' Hang in kids. It gets better after graduation, I promise. I'm living proof high school is not the best years of your life."

Now he seems determined through charitable and other works to help others enjoy their lives to the fullest.

Brad's H20 World Tour has dates scheduled through September 25 in Denver, Colo. For a complete list of dates, click here.