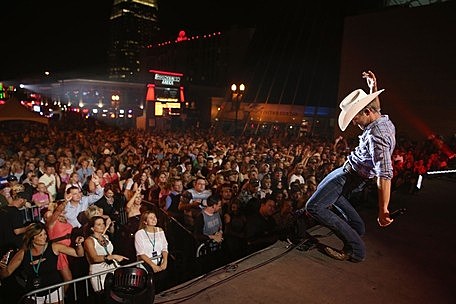 Justin Moore's latest album, 'Off the Beaten Path,' will hit shelves on September 17, and the Arkansas native is eager to share the new set of tunes.

"I'm very excited to get new music out there for the fans," he tells Taste of Country. "Especially who've had the last two albums for so long, and lived with those. We don't get to do it but every couple of years now, and I'm really, really excited. I think it's the most diverse album we've done. There's 16 songs on it. There's a lot of what I've always done, but there's a lot of stuff I think on this album that will helps us grow our fan base to a place it's not ever been before."

The 'Point At You' singer juggles his busy career with being a husband to his wife, Kate, and hands-on dad to his two little girls, three-year-old Ella and one-year-old Kennedy. Moore admits being a parent isn't always easy.

"I actually just had the girls ... by myself at the house, which was a trip." he recalls. "It was a lot of fun, but it was a trip." To prove his point, the 29-year-old tweeted a photo of himself sporting bright green toes, thanks to his creative little girls.

"I finally have washed all of that crap off my feet," he laughs.

The singer-songwriter is known almost as much for his energetic stage presence as his chart-topping tunes, including one pelvic-thrusting dance move that has quickly been gaining its own notoriety.

"I call it the Luke Bryan. I'm trying to emulate what he's doing," Moore jokes. "Somebody asked me the other day about something else I do, and I don't even know that I do that stuff. I just kind of go out there and it happens. Subconsciously you take things from people you looked up to growing up in this business. I was a big fan of Dwight Yoakam, who always was doing something like that. Tim McGraw I think is great on stage. I've always been a big fan of him and his stage presence. So maybe subconsciously I'm blending some of their stuff together."

Moore will spend much of the summer on the road, including stops in Texas, Wisconsin and Vermont. See all of his upcoming concerts here.