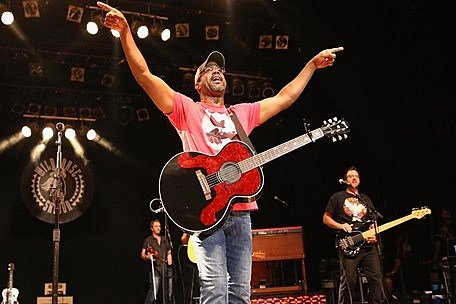 The numbers are in for the fourth annual Darius and Friends benefit. Spearheaded by Darius Rucker, the charity concert, auction and celebrity golf tournament raised more than $95,000 for St. Jude Children's Research Hospital.

The artists all shared some of their own hits with the crowd before teaming up with Rucker for a cover duet. Rucker then called everyone on stage for a group rendition of the Hank Williams, Jr. classic 'Family Tradtion' before closing out the night with his recent No. 1 hit 'Wagon Wheel.' Rucker's band, the Carolina Grey Boys, served as the house band for the evening.

"I look forward to this event all year long," Rucker says in a press release. "I get to share the stage with some of my favorite artists, friends and musical influences. As much fun as it is, it's all in the spirit of raising support for St. Jude's, an organization very dear to my heart."

One particular performance stood out from the rest for Rucker. "Getting to sing with Sam Bush and John Cowan from New Grass Revival, one of the bands that made me want to be a country singer, made the night even more amazing for me," he shares. Rucker joined them for 'Callin' Baton Rouge.'