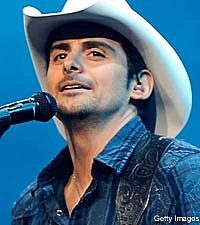 Brad Paisley fans are getting added value in the fun-filled Water World Plaza that accompanies the singer's current H20 tour. Fans have been enjoying taking turns at the dunking booth or the fishing simulator, or listening to pre-main show entertainment by Easton Corbin, Steel Magnolia and Josh Thompson.

Brad is thrilled that the Water World area has been such a hit with the fans. "People are sinking their teeth into having a whole day's worth of stuff to do," he tells The Boot. "On Sunday, in Cincinnati, we had an audience of 8,000 watching the new acts at four in the afternoon."

While the water theme is a hit on the road, thoughts of a much less fun time with water remain on Brad's mind. When Nashville was flooded in early May, the singer lost many of the guitars in his collection as well as his original set for the H20 tour. While the set for the tour looks exactly like it was planned, the crew was scrambling to replace panels that make up the backdrop for the show.

"Of the 300 panels, 260 are brand new and were not in our possession as of that Saturday when it started raining," Brad says. "Almost all of the original panels ended up under water, but most of them still looked okay. We were tempted to use them but the problem was with the cables that were attached to them. As we started plugging them in, they would catch on fire. So you'd be in the middle of rehearsal and you'd hear POP and look up and there would be flames and we were like, 'Wait a minute we're not doing pyro; it's not supposed to be that way.'

"What's crazy about this tour is we had to do things we have never done before," admits Brad, who just celebrated his 17th No. 1 single with 'Water.' "We usually take three weeks to rehearse, but we had five days. The night before we were opening in Virginia Beach we were rehearsing, and at ten [minutes] to 11:00 PM, I said, 'This set is not gonna work. The fourth song has to be moved here, we have to move this to the end.' So I changed the whole list, we did a run through the next day before opening that night, and it worked. We lucked out."

Brad's nearly two hour show includes an acoustic set performed from a stage in the middle of the audience -- a trick the singer does because he wants to give the fans in the back of the room the opportunity to be closer to him for part of the show. Brad says he can remember attending concerts where he was not close to the stage so he could have a good view of the performer. Of course, with the huge video screens, laser show and all his special graphics and videos, the audience gets the feel of being in the middle of the action no matter where they are in the arena.

During his encore, Brad invites Steel Magnolia, Easton Corbin, Josh Thompson, Justin Moore and Darius Rucker to join him onstage during his performance of 'Alcohol.'

"I told them before the tour started that at the end of the show we were gonna wheel out a bar, serve them drinks and then they could go out and shake hands and sign autographs while they're singing along," Brad explains. Apparently the newcomers are a little leary of Brad's hospitality, since he has a reputation for being a prankster on tour.

"The first few nights, Steel Magnolia, Easton and Josh would walk out and they'd be walking as far away from me as they could. Now Justin and Darius have been out before so they knew what to expect. But the new guys, they would be walking over to the bar and they'd be watching me over their shoulders, like they think I'm gonna prank them during my show! Now they've gotten better and they come out and sing along with 'Alcohol.' They've learned that I'm not all that bad!"

Brad says when he sees the crowds that are coming out to see the H20 tour, and thinks about how he and his team had to scramble to get it all together, he can hardly believe it. "People are desperate for entertainment right now and it feels good to be back out there doing it on the road," he admits. "Just knowing what my crew accomplished in those days after the flood before we started this tour, it makes me very proud and happy to be out here on tour with all these folks."

Brad is in Austin this Saturday for Aquapalooza at Lake Travis. He resumes his regular tour on July 16 in Chicago. The H20 tour closes on September 25 in Denver.