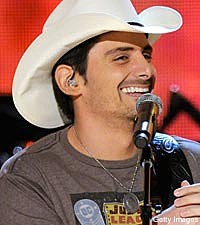 Before the launch of every tour, Brad Paisley, his band and crew work overtime preparing to give fans the best possible experience when they come out for a show ... But preparations for the H20 World Tour, which launches tonight (May 21)at the Verizon Wireless Amphitheater in Virginia Beach, tested Brad and the guys in ways they never imagined.

"I watched my crew wade through water for this tour. They waded waist deep in water to save what they could and pull this off," Brad tells the Boot, sitting down for a break during last weekend's rehearsals. "I wouldn't change that for anything and neither would they. It was one of the best weeks of my life in some ways, because I felt like I saw the best in people. I saw the best in my crew. They pulled together something for this tour. We had absolutely nothing left really besides the lights last week."

Brad had been set to start rehearsals much earlier at Bridgestone Arena in downtown Nashville. His lighting system had already been installed above the stage and thus became the only piece of the tour not damaged by the flood. Many of Brad's guitars, amps, the set and all touring gear had been stored at a Nashville warehouse that was flooded by the rising Cumberland River. After the flood, they had to scramble to replace everything from the giant video screen to instruments. Bridgestone Arena also took on water, so they also had to find another place to rehearse and landed in Gayle Technologies Inc. (GTI) outside Nashville, a facility previously used by Taylor Swift for tour rehearsals.

"It's more important than ever to me that we get out there and we absolutely have the time of our lives, not just our audience, but that we do because we really have earned this at this point," Brad says of the show tonight. "When we get to Virginia Beach and I get to go out there and throw the first pitch at the dunking booth and dunk whoever the morning DJ is that happens to be sitting in it ... it's going to be so rewarding to me. We will live this up in a way that we wouldn't have. It's the reason there was a baby boom after WWII, people wanted to party. [With] this whole crew it's like 'Watch out!' When they get to Virginia Beach, I have a feeling they are going to be ready to party!"

The H20 World Tour presented by Chevy will travel to 75 markets, including stops in the U.S., Canada and Europe over the next year. Darius Rucker and Justin Moore will be opening for Brad on the main stage, with Easton Corbin, Steel Magnolia and Josh Thompson on the Water World plaza stage. Fans will also have a chance to check out the Chevy H2O FLW fishing simulator, a dunking booth where they can dunk their local DJs, and a Corvette driving simulator where they can test their skills against Brad and get a chance to meet him.

"You get in and you have to race and you race against my time in a Corvette," he explains, "and whoever gets the highest time every day gets to come back for a meet and greet."

Brad was putting buckets under leaking water at in his home and when he went to check on the 100-year-old farmhouse, where he and his buddies write songs, the roof was leaking in the kitchen and the garage had flooded. "I opened the garage doors. They were holding in the water and I opened them up and everything just went whoosh. I had to go chasing after memorabilia that was sitting in the garage, the stuff started to float," he says. "Then we have a hillside that's still sliding and we're trying to stop. It's more rain than we've ever had to deal with in our lifetime."

The Paisleys also had a 50-foot tree that fell, but Brad is quick to downplay the things he's dealt with. "There wasn't anything tragic. It wasn't that bad," he says. Instead he's focusing on helping others.

On the H2O tour, he's partnering with Hope Through Healing Hands, a Nashville-based organization chaired by former U.S. Senate Majority Leader Bill Frist. The organization has launched the Water = Hope Campaign to raise money and awareness for clean water initiatives. Before each show, fans will have the opportunity to visit the HTHH booth and learn more about how they can help as well as text their donations to support the campaign for clean water around the globe.

"Water is the most important substance on our planet and in short supply in some places," Brad says. "We've had too much here, but for two years we had a drought."

Brad explains that there will be a "giving booth" and some information on global water shortages for people to share on this tour.

"It's not all fun and games," he says of the H2O shows. "There's obviously going to be fun and games with the Chevy simulators and the fishing thing and the dunking booth for DJs and all of that, but then there's a booth that talks about water charities. That was my intent in the beginning, to make this thing more important than just a bunch of people getting drunk on the lawn every night."