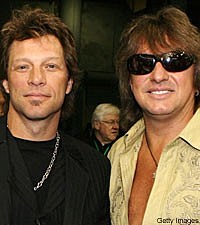 Country and rock-blending tunesmiths Jon Bon Jovi and Richie Sambora join another songwriting team who also enjoyed crossover success -- Roger Cook and Roger Greenaway -- as inductees into the Songwriters Hall of Fame for 2009.

Although they have their roots in rock, Bon Jovi and Sambora reached the top of the country charts with the song they co-wrote, 'Who Says You Can't Go Home,' a duet with Sugarland's Jennifer Nettles.

British born songwriter Roger Cook and partner Roger Greenaway, who performed briefly as a pop duo called David & Jonathan, wrote several country hits including Crystal Gayle's 'Livin' In These Troubled Times,' Don Williams' 'I Believe in You,' and George Strait's 'One Night at a Time. Pop hits the pair penned include the Hollies' 'Long Cool Woman (In A Black Dress)' and 'Doctor's Orders,' by Carol Douglas. In the early 1970s, the pair were also responsible for helping to create an iconic Coca-Cola jingle which had life a successful pop hit called 'I'd Like to Teach the World to Sing (in Perfect Harmony).' Cook is also the father of CMT personality Katie Cook.