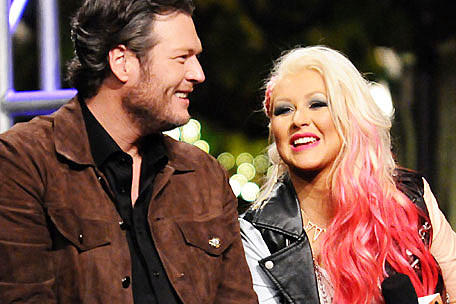 They may poke fun of one another on "The Voice," but Blake Shelton and Christina Aguilera are actually good friends ... and big fans of each other's music. So when it came time to create her new album, Lotus, the pop superstar had her first choice in duet partners on speed dial.

"He's my big brother," she says of the reigning CMA Entertainer of the Year, "and I'm the closest to him of all the guys. Blake is just a rockstar; he's great. He's so playful, so fun and down to earth. He's got a lot of heart."

Along with gorgeous harmonies, the "Voice" buddies trade lead vocals on the power ballad, "Just a Fool," and you'll never believe what Blake claims to have done in order to hit the song's incredibly high notes. We might get in trouble for typing it out, so you'll have to hear it from Christina herself in the video below. (But warning: it's a bit racy and may make you cringe -- especially if you're a guy.)

Watch below as the only female "Voice" coach talks about "Just a Fool" and plays the song for fans. Lotus, the vocal powerhouse's seventh studio album, hits stores Nov. 13.