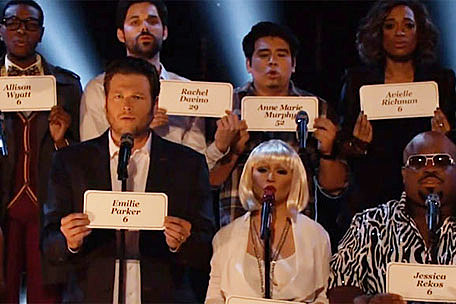 As the nation tries to cope with the Dec. 14 massacre at Sandy Hook Elementary School in Newtown, Ct., judges and finalists from "The Voice" made sure that the victims -- 20 young students and six staff members -- were honored during last night's (Dec. 18) show.

The group opened the broadcast singing "Hallelujah," each holding a placard with the name and age of each of the 26 victims, with candles surrounding the stage. Judges Christina Aguilera, Blake Shelton, Cee Lo Green, and Adam Levine all had solos, and were joined by this season's contestants, host Carson Daly and backstage host Christina Milian. Watch the touching tribute on AOL Music.

"The Voice" is down to its Top 3 contestants, Nicholas David from Team Cee Lo and Team Blake's Terry McDermott and Cassadee Pope. The winner will be crowned tonight (Dec. 18) on the live finale, which begins at 9:00 PM ET on NBC.