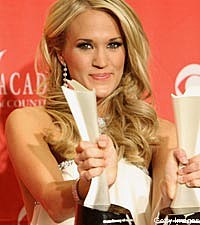 The Academy of Country Music Awards are getting a major makeover. Several ACM Award categories are being changed for the 2010 show. The night's top honor, Entertainer of the Year, will now have eight nominees instead of five. The New Male Vocalist and New Female Vocalist awards are now combined into one category, New Solo Vocalist. But the New Vocal Duo or Group award is now being split up into two separate categories. All three of those new artist awards will be given out a few weeks before the broadcast, and the three winners will then compete for Top New Artist, which will be revealed during the live broadcast.

Once again, the ACM Awards are split, with some categories being industry-voted and others fan-voted. Fans will be able to vote online in the Entertainer, New Solo Vocalist, Vocal Group and Vocal Duo categories.

The ACM Awards air live from Las Vegas in Spring 2010, with the exact date to be announced soon.