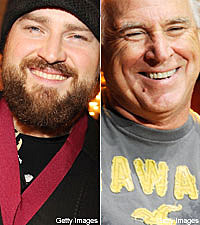 A little sand and the smell of saltwater on a fresh ocean breeze were the only things missing when Jimmy Buffett and the Zac Brown Band blew into Nashville for a 'CMT Crossroads' taping in front of an invitation-only crowd.

"Put away all those coats and pretend that you're warm," Jimmy told the full house who had braved Nashville's coldest night of the year to fill the room at Liberty Hall.

"I went to see Zac Brown a few months ago and as I suspected, he reminds me of what I was doing 25 years ago," Jimmy said. "You know, I didn't invent the Jimmy Buffett sound. I listened to Harry Belafonte and others like him back when I was starting out." After a pause, Jimmy looked and Zac and said, "The torch gets passed on, so here's the torch, man!"

"Not many people have done it their own way and built the empire you have," Zac responded.

The two singers and their bands traded songs, each joining the other for favorites including Zac's 'Chicken Fried' and Toes,' along with Jimmy's 'Son of a Son of a Sailor' and 'Margaritaville.' Before launching into the first song of the evening, Zac told the audience, "I was sitting at home one day and a friend called and told me, 'I'm sitting here with my toes in the water and my ass in the sand.' That's how the song came about."

Jimmy was complimentary of Zac and his band throughout the night, often comparing their background to his own as he reflected on their music. "I can tell you're not a normal country singer," he said to Zac at one point. "What's with that hat?" Later he confided, "You know I've got one of those hats too."

Before they launched into 'Where the Boat Leaves From,' Jimmy said, "I write a few songs about boats and the first time I heard this one, I [thought], 'That's a song I wish I'd written'." After that performance, the Country Music Association's Instrumentalist of the Year, Mac MacAnally, joined the musicians onstage. "He's musician of the year and he's having trouble plugging in his guitar," joked Jimmy as Mac took a few moments to get ready to play.

"I have to tell you that the van referred to in this song was used only to go to Jimmy Buffett concerts," Zac said prior to singing 'Free,' a song about traveling across country and living in said van.

After a rousing version of 'Chicken Fried,' the singers had to repeat the first two songs, as is common practice with TV tapings. "It wasn't out fault, honest," Zac said. "I think they screwed up out in the [sound] truck." The energetic crowd, on its feet much of the night, wouldn't have cared if the two bands had to repeat every song several times. They were in the mood to party, whistling and screaming throughout the evening.

"When you do other people's songs you have to learn them and it's like doing homework or going to summer school," Jimmy said as they went into the second half of the taping of his songs. "Now we're coming to the easy part of the show for me. We're gonna cover things you know but I'm also going to do some shameless promotion for a new album that will probably be history by the time this show airs."

Jimmy's first song was 'Son of a Son of a Sailor.' "We were talking earlier today about authenticity in songs," he said. "This is definitely one where I know most of the characters in it."

Among the new material from his just-released 'Buffet Hotel' CD, Jimmy sang the new single, 'Nobody from Nowhere,' written by Nashville's Will Kimbrough. It's the story of someone from a small town with a four-way stop, fields, cows and farms, who stands and waits for a car to go by so they can wave hello. Jimmy also did 'Wings,' a song affirming that "everyone has a pair of wings that you can't see."

"[It] came from a hotel I saw when I was in Africa, in Timbuktu," Jimmy explained of the title that omits the second 't' from his last name. "It was called the Buffet Hotel and I decided it would be a cool name for an album." He paused, then added, "The record label should never let an artist name their own album. But after 21 records, what the heck."

In introducing the final song of the evening, Jimmy said, "Thank God for this song" before launching into 'Margaritaville.' While the crowd hoped someone made a mistake so he would have to do it over, the song came off perfectly and Zac and Jimmy said their good-bydes. Coats went back on, gloves and scarves mysteriously appeared, and folks drifted out into the cold night air, with the sounds of the islands still lingering in their ears and keeping them warm as they headed to their cars.

The 'CMT Crossroads' with Jimmy and Zac will air on CMT in March.