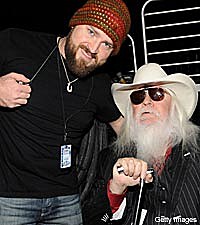 For Zac Brown, just getting a Grammy nomination in the Best New Artist category is unbelievable. In fact, he couldn't quite grasp it when asked if it had sunk in yet. "No, not really. That's something that's still gonna take a while to get my head around. It's like shock almost," he told The Boot at Grammy rehearsals.

So that in and of itself would've been special enough, or even stopping in as he did just to say hey to Dave Matthews, whom Zac greatly admires. "Dave's a hero. He's a guy who's made his own path and done everything he wanted to do and has thrived in that environment, so we're proud to follow in his footsteps," he says. "There are very few people that have made it great and on this level like Dave has."

All great stuff, but there's even more this weekend for the band. They'll be joined during their performance by Leon Russell. "[We're] playing with Leon Russell, a legend," Zac gushes. "We're big-time fans of Leon, and we talked about collaborations and [producer] Ken Erhlich had run his name by us and we're like, 'Yeah, we'd absolutely love to do something with Leon.' We're big Joe Cocker fans back in the day, and Leon was the guy behind Joe Cocker for a long time. We're super excited."

What would that teenage fan of Joe Cocker say now to performing at the Grammys with Russell? "[I] never would've considered it a possibility in a million years," Zac says. "I knew we were gonna work hard and really dedicate our lives to the music and see where that took us and hopefully into a great touring career, which we've been able to develop. [But] this is an amazing milestone, it's something we'll never ever forget."

You can watch Zac Brown Band perform with Leon Russell tonight on the 52nd Annual Grammy Awards at 8:00 PM ET on CBS.