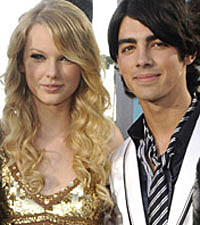 As if music fans didn't wonder enough about Taylor Swift's love life, her latest single has sparked a new level of intrigue regarding just whom the song addresses. "We Are Never Getting Back Together," the lead single from Taylor's forthcoming album Red, is already breaking records, becoming the fastest-selling single to reach No. 1 on iTunes in a mere 50 minutes.

Despite the song's success, one of Taylor's exes, Joe Jonas seems eager to distance himself from the track. According to E! Online, Joe confirms that the song is definitely not about him.

"I can say it's not about me, because I don't think we've ever tried another time," Joe said in an interview with radio station 94.7 Fresh FM. "I like the song, I think the song is great ... Taylor does pop music really well and I'm happy for her."

Others speculate that the song is about Taylor's other recent ex, John Mayer, but after she slammed him in "Dear John" it seems unlikely. Which means the song could be about actors Taylor Lautner and Jake Gyllenhaal, or another not-likely-to-be-identified-anytime-soon ex-beau.

The guessing games will no doubt continue when Red hits stores Oct. 22.