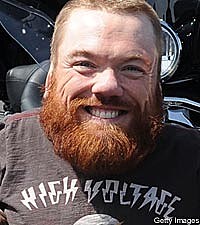 MuzikMafia fans are well aware that Two Foot Fred, aka Fred Gill, has been riding high on stage with Big & Rich -- emceeing their live shows and energizing crowds on their tour -- after he first popped up in their debut video 'Save a Horse (Ride a Cowboy)' in 2004. But those not familiar with the Seymour, Indiana native might be questioning -- just who is Two Foot Fred and what does he do? The answer: a lot.

A self-proclaimed "dot connector," Fred's transition from restaurant owner and real-estate entrepreneur to a regular gig as Ambassador of Attractions for Big & Rich was -- in part -- his own doing ... with a little bit of luck after a chance meeting with John Rich.

Born with a form of dwarfish known as diastrophic dysplasia, Fred (who actually stands at three feet two inches tall) underwent corrective surgeries early in life for a cleft palate, club feet and scoliosis. Fred's grandfather crafted him walking sticks to help him keep his balance after the scoliosis surgery left him unable to walk unassisted.

None of this deterred Fred from forging ahead, driving at the age of 16 and getting his degree at Indiana's Ball State University. At 35, Fred is on top of his game, enjoying his new life as a country star and excited to share his story with The Boot.

You opened your first restaurant at age 22. How did you get interested in the business?

I graduated with a degree in Entrepreneurship. In order to get that, we had to write a business plan that would have been viable had you had the resources to follow through with it. But it just so happened I did have the resources and the intention to open the restaurant on the business that I wrote my senior thesis on. On Christmas break in my senior year, I had the financing and I bought an old pub. The owners allowed me to wait until May when I graduated to take over. I graduated May 10 and had the keys to the restaurant on May 21, 1997.

Then you became a real-estate tycoon, managing up to 250 properties at once?

I knew I was not going to be in the restaurant business for the rest of my life. It was just too consuming, and I just didn't have a life. That was my only life, the restaurant. So I sort of migrated. My parents had a background in real estate, and so I decided to expand on their real-estate holdings. I went to night school while I was running the restaurant, and got my real estate sale-person's license, and used that to find all the good deals and start buying real estate.

But in 1999, you took a trip to Nashville that changed your career path.

I came for Fan Fair [CMA Music Fest]. I was worn out by the restaurant business, and I needed a break. I came to Nashville by myself because all my friends either had day jobs, regular jobs or didn't like country music. So I came to Nashville, and that's when I met John [Rich]. We just exchanged email addresses, and then I went about my business at Fan Fair, had a great time, and then fast-forward five years, and he hit me up and said he had a new crazy duo going on called Big & Rich and wanted to know if I'd like to be in the video for a song called 'Save a Horse (Ride a Cowboy).' We filmed it six years ago. I was not known as Two Foot Fred before the video shoot. He emailed me, "Hey, Fred, I hope it's cool with you but we're going to lovingly refer to you as Two Foot Fred on the set, is that OK?" I said, "Absolutely, no problem. That's cool."

How did you meet John exactly?

I was in a bar in downtown Nashville called the Beer Sellar, and his girlfriend at the time was a bartender there, so he was waiting for her to get off work. I recognized him because he had been with Lonestar, and at that time he had the solo career going on. So I just struck up a conversation with him, and then we exchanged email addresses.

Did John invite you into the MuzikMafia?

At that time, I didn't really know anything about the MuzikMafia, Big Kenny and Gretchen Wilson. I heard of Gretchen because at that time, 'Redneck Woman' had just come out. So I went to these Mafia [events], they took care of me. I called John's manager and said, "The Mafia guys invited me to Vegas to hang out for the ACMs, I just wanted to give you a heads-up that I'm coming out." He said, "Oh, you should bring your outfit out that you wore in the video." I bring it, and they were performing on the ACMs. So the first awards' show I've ever been to, I ended up performing on, which was the ACMs in 2004. I come back down to Nashville for Fan Fair ... the guys got me a pass to come hang with them wherever they were. I remember Gretchen was performing with Brooks & Dunn at the Titans' stadium, and I watched the rehearsals because they were getting ready to go on the road with Tim McGraw.

I got online and mapped out where they were going to be with McGraw. I'm about an hour north of Louisville, Ky., so they were going to be in Cincinnati, Indianapolis, Detroit, Chicago and Milwaukee, all in like a five-day run. So I drove over to Cincinnati, got a hotel room, went to the show, hung out with them, went back to the hotel, got up the next morning, drove to Detroit and did [the whole tour]. Finally in Milwaukee -- I think it was the 4th of July 2004, because I remember I got to meet Faith [Hill] because she was out doing fireworks with the girls from the bus -- the guys are like, "Hey, Two Foot, we enjoy having you out here with us big time, but how are you getting to all these shows?" And I said,"Oh, I'm driving, it's no big deal." And they said, "No, no, no. Next time you want to go to a show, drive to Nashville, and then you can hop on our bus, we'll clean out a bunk for you, and you can ride with us for a weekend."

At one of the shows, the Warren Brothers -- who were opening for Big & Rich, brought up wanting to know if I wanted to introduce them on stage. I said, "Absolutely." John and Kenny said, "Why aren't you doing that for us?" I made arrangements to be out more, and then it was pretty much understood I was going to be out the whole second leg of the tour – 30 or 35 shows in '04. I moved to Nashville in January 2006. 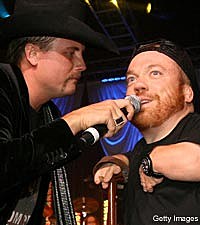 You were introducing them, but you were on stage performing with them also.

Do you sing or do you just dance on stage?

I do not sing, I'm a visual guy. They do allow me to do about five or six minutes of comedy at the top of the show. While I'm introducing them, I do some jokes ... For someone who came from a business background but was always a ham, it's very rewarding. I'm still pinching myself ... being able to hang out with and work with not only Big & Rich, but people industry-wide that I've been a fan of and have admired for a long time.

How do you come up with comedy material?

Some of my stuff is self-deprecating, being a dwarf. Larry the Cable Guy is a good friend of mine, and he helped me write one of my jokes. Actually, it's more observation that happens to be funny.

How did you get the title Ambassador of Attractions for Big & Rich?

Somewhere in late '05, early '06, they gave me that title. Up to that point, I was there on my own free will. It really wasn't a paid position, and I was OK with that at that point. And then I started doing more and more promotions, doing some radio stuff for them, so they created that position of Ambassador of Attractions, which I still do when we're not actively working as Big & Rich ... I still do kind of the same thing for John, which is just kind of relationship building.

How would you describe your friendship with John?

He's a very good friend. He's one of my best friends, if not my best friend. I wouldn't be talking to you certainly right now if it wasn't for John Rich. I will always give him 100 percent of the credit of putting me in a position to launch. He'll tell you that he is able to put people in certain positions, and then it's up to you. You've got to do your thing. He's very astute at plugging people in where they can really soar.

Have you been to see his new baby yet?

Absolutely. I was there at the hospital when Cash was born. We've had several functions at John's new house, and I've seen Cash quite a bit.

What is your goal now?

My goal is probably film and TV. I'm actually working toward that. I've got a reality show that we're actually in the negotiation stage, so I can't say a whole lot more than that. I'm actually reading for movie scripts. I'd love to do a sitcom at some point. I won't stop doing music, but the end result is directing films and making films.