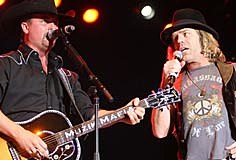 Big & Rich's 'Comin' to Your City' has once again been chosen as the theme song for ESPN's 'GameDay.' The dynamic duo are currently shooting a new intro for the title track from their second album, complete with revised lyrics for this season's hottest college teams. The tune has served as the theme song for the long-running sports show for six consecutive seasons.

The duo's new single, 'Fake I.D.,' was just released to country radio, and will appear on the upcoming soundtrack for the feature film 'Footloose,' which stars dancer/actress/singer Julianne Hough. Big & Rich are currently plotting a full-length album with an anticipated fall release date.

Fans can catch Big & Rich with co-headliner Gretchen Wilson on the Xtreme Muzik tour this summer, with shows stretching through September.