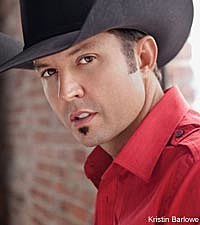 While Arizona and New Mexico have been keeping Troy Olsen a simmering secret for more than ten years, EMI Records and iTunes are letting the proverbial cat out of the bag, sharing this triple-talented new artist with the rest of us. While his self-titled album won't be released in full until later in the year, Troy's debut single, 'Summer Thing,' can be heard on radio now and downloaded by fans at iTunes for free! iTunes has proclaimed 'Summer Thing' its Single of the Week at their iTunes Store, where fans can take a listen and download the song free of charge now through Monday, July 12, here.

Before Nashville finally lassoed Troy into making an album for national release, he was a well-known favorite on the club and dance hall circuit of New Mexico and his native Arizona. Having grown up around country music and learning to play the guitar as a teenager, Troy was able to earn a living as a professional musician by the time he was 20. A chance meeting with Linda Ronstadt led to a publishing deal with Windswept Pacific. "It all happened very fast," he remembers. He recorded an album that earned him a large international following, and his songwriting skills were developing quickly. He moved to Nashville in 2002 and started writing songs for artists like Blake Shelton ('I'll Just Hold On') and Tim McGraw ('Ghost Town Train').

Troy promises fans that his upcoming album will be "just much more me," he says. "It's just real music about situations I've been in."