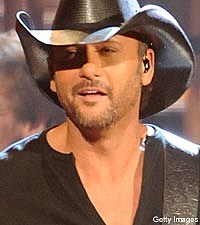 Tim McGraw has released 10 studio albums since he first signed to Curb Records almost 20 years ago. In spite of dozens of Top 10 singles and millions of albums sold, the singer-turned-actor reveals he's more than ready to act on finally leaving the label tied to much of his musical success.

"In the history of the music business, artists and labels have not gotten along incredibly well," Tim tells the Vancouver Sun, "because there's a financial way to do things and there's an artistic way. There's just other things I would like to do, and I think the best part of my career is ahead of me."

What is unclear is whether Tim will sign to another label, or start his own. "I don't know," he admits. "I'm just gonna see what's best for me. The music business, there's no formula to it. You sort of have to find your own way. It's a changing industry, and it's not gonna be the way it was before. Labels do need to figure out how they're going to operate in the future, if they're going to operate."

Already announcing plans to record a duets album with his wife, Faith Hill, Tim -- who famously disparaged the release of his third greatest hits CD which he claims Curb released against his will -- is committed to doing one more album before his Curb contract is fulfilled.

After that, the Grammy-winning singer also hopes to delve even deeper into his other passion -- acting. Appearing in the Oscar-winning film, 'The Blind Side,' with Sandra Bullock, he will next star with Gwyneth Paltrow in 'Love Don't Let Me Down,' as well as in the upcoming indie flick, 'Dirty Girl' opposite William H. Macy, Dwight Yoakam and Milla Jovovich.

"You try to find stuff you relate to and like," he explains. "My career would be nowhere without great songs, and I sort of approach it the same way now, when I'm reading a script."

Tim is currently on the road, headlining his Southern Voice tour, with opening acts Lady Antebellum, Lost Trailers, and Love and Theft. The title cut from his album, also called 'Southern Voice,' earned Tim his 22nd No. 1 hit.