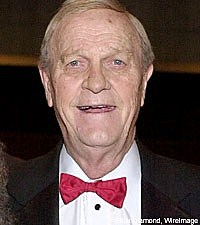 Eddy Arnold, one of the pioneers of 'The Nashville Sound,' died Thursday morning, just days before his 90th birthday. The legendary country singer was second only to George Jones in the number of songs that made the country charts, with 145 radio hits -- 28 of those making it all the way to No. 1. Some of his many classics include 'Make the World Go Away,' 'Bouquet of Roses,' 'Lonely Again' and 'Cattle Call,' just to name a few. Many of those hits also made it onto the pop charts, as Arnold became one of the first crossover successes to come out of Nashville, paving the way for future country-pop acts like Kenny Rogers and Charlie Rich.
Arnold, nicknamed the 'Tennessee Plowboy,' was born in 1918 and raised on a farm near Henderson, Tenn. He left home at age 18 to pursue his career, making his way on radio airwaves in Tennessee and Missouri before becoming nationally known as a Grand Ole Opry regular in 1943. He cut his first solo album in 1944, but it was his 1946 hit, 'That's How Much I Love You,' that put him on the map as a country superstar.

Arnold was inducted to the Country Music Hall of Fame in 1966. The following year, he was named the Country Music Association's very first Entertainer of the Year. And in a career that spanned almost 60 years, he boasted sales of more than 85 million records.

Arnold's wife of 66 years, Sally, passed away in March. He is survived by his son Dickie, daughter Jo Ann, two grandchildren and four great-children.