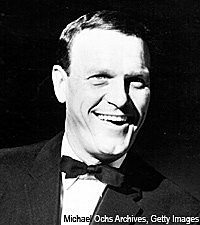 A California man wants Eddy Arnold's body exhumed for a DNA test. 47-year-old Christopher Tanner is claiming to be the late country legend's son. An attorney for Arnold's estate confirmed to Nashville's Tennessean newspaper that the singer was made aware of Tanner's claim but vehemently denied his paternity.

"For one thing, what we've been told is that the petitioner is 47 years old, and it's pretty suspect that a someone who really thought Eddy Arnold was his father would wait 47 years," explained Bryan Howard, who went on to say that Arnold's family is "very upset about it and the fact that someone would try to damage his reputation.''

Tanner's mother claims that she had a romantic relationship with Arnold for three years in the late 50s. She says she tried for years to arrange a meeting with the singer and her son.

"It's not like we just popped out of the woodwork," Arlene Tanner-Glynn told the Tennessean. "They've known about us pretty much my whole life."

So why are they still pursuing a relationship with the Arnold family, a month after the singer passed away? Tanner insists it has nothing to do with Arnold's reported $40 million estate.

"It's more to stake my claim to being his son," says Tanner. "That is important to me . . . If I had the DNA, maybe I would change my last name to Arnold."

His mother disagrees. She says she asked the Arnold's attorney, "Don't you think he [my son] should be entitled to part of the estate after all of this nonsense all of these years?"

Tanner has filed a petition requesting tests on Arnold's remains. The country legend died May 8 at age 89, just two months after his wife of 66 years, Sally, passed away. The couple had two children.