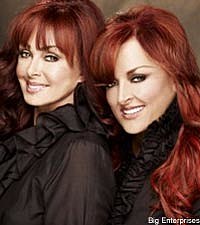 The Judds have revealed the on-sale dates for their final tour, the Last Encore. Wynonna and Naomi have also announced plans to offer VIP Fan Experience packages to give fans (affectionately dubbed 'Judd-heads') unprecedented access to the iconic country duo. Tickets for their Green Bay, Wisc., stop, the first of 18 scheduled shows, go on sale Saturday, July 17.

With the Judds Fan Package, the first of two special offers, concertgoers will have premium seating in rows 6-10, coupled with preferred parking (where available). Fans will also be granted early access into the venue and given the chance to shop in a crowd-free environment. There's also the opportunity to relax in style at an exclusive pre-show reception with hors d'oeuvres and cold beverages. They will also be given a free one-of-a-kind 'Fan Experience' t-shirt, which won't be available for purchase anywhere.

And if all that isn't enough for you, there's the VIP Package, with all the perks of the Fan Package, plus guaranteed seating in the first five rows and post-show meet and greet with Wynonna and Naomi, an autographed commemorative plaque and a free digital photograph! All VIP ticketing packages will be sold exclusively on the official tour website.

From the release of 'Mama He's Crazy,' the Judds' first No. 1 single in 1983, the mother-daughter duo were a sensation, topping the Billboard charts 14 times and earning a slew of ACM, CMA and Grammy awards. Naomi retired in 1991, battling hepatitis, after which Wynonna embarked on a hugely successful solo career. The pair have reunited briefly in the past and opened the 2010 CMA Music Festival, giving fans a taste of what the Last Encore tour will offer.

In addition to new Judds music and a quarter-century's-worth of their hits and other fan favorites, the set list will feature some of Wynonna's best-loved solo work. And with the tour opening November 26, the day after Thanksgiving, fans can also expect the duo to add a few Christmas songs to the show.