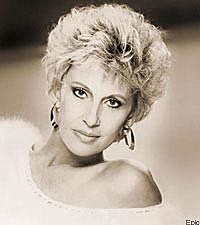 The Country Music Hall of Fame and Museum has announced it will pay tribute to the great Tammy Wynette with an exhibit titled Tammy Wynette: First Lady of Country Music. Presented by Great American Country (GAC) the exhibit will open in the Museum's East Gallery on August 20, 2010, and run through June 2011.

"Tammy Wynette was a true steel magnolia, a daughter of the South whose ladylike appearance and slight physical stature belied the magnitude of her grit, determination and talent," said Museum Director Kyle Young in announcing the exhibit. "Throughout her career, her personal and professional lives were indistinguishably interwoven, resulting in achingly honest recordings and performances to which fans could relate. She helped redefine what it means to be a female country singer. Her death at age 55 came far too soon, but Tammy left behind a musical canon that is among the strongest and most influential in American music history."

Tammy was born Virginia Wynette Pugh on May 5, 1942, in Mississippi native, raised by her cotton-farming grandparents. Her father, who died of a brain tumor before Tammy reached her first birthday, had once attempted a singing career. Tammy helped her grandparents pick cotton and in her spare time took music lessons, singing with two friends on a local gospel radio show. Discovered by Birmingham, Alabama TV host Country Boy Eddie, she performed on his show several times. After landing a brief tour with Porter Wagoner, Tammy relocated to Music City in 1966.

During a visit to the office of Epic Records executive and producer-songwriter Billy Sherrill to pitch him some songs, he signed her to the label. He also suggested a catchier first name for her: Tammy. Straight out of the gate, her first single, 'Apartment #9,' was a hit, and her follow-up, 'Your Good Girl's Gonna Go Bad,' reached the Top 5. She soon had the first of what would be 20 career No. 1's with 'My Elusive Dreams,' a duet with David Houston, followed by another chart-topper, "I Don't Wanna Play House," which also earned her a Best Female Country Vocal Performance Grammy award.

The hits that followed, including 'D-I-V-O-R-C-E' and 'Stand by Your Man.' not only became signature songs for Tammy, they have become country-music standards. Tammy soon earned the first of three consecutive CMA Female Vocalist of the Year awards and for 'Stand by Your Man' won her second Best Female Country Vocal Performance Grammy. In addition to her many hits, Tammy is perhaps best-known for her marriage to (and divorce from) singer George Jones, with whom she recorded several duets including 'Golden Ring' and 'We're Gonna Hold On.'

Although she struggled with numerous health issues throughout her adult life, enduring more than two dozen major surgeries and suffering a near-fatal abdominal infection which resulted in an addiction to painkillers and treatment at the Betty Ford Center.

Tammy died at age 55 on April 6, 1998. She was elected to the Country Music Hall of Fame later that year.