Mandy Barnett is probably best known for her ongoing role as country legend Patsy Cline in the long-running, popular stage production, 'Always ... Patsy Cline,' but she's actually been building a legendary career of her own for years. Performing since the age of nine, Mandy spent years cutting her musical teeth as a Dollywood performer before bringing her talents to Music Row as a teen. On her first album, she worked with legendary producer Owen Bradley (who was known for his work with Patsy Cline) and has always favored the lush, rich, retro sounds of the '40s, '50s and '60s over the modern country pop blends of today. It's no wonder that when Cracker Barrel approached her to record a Christmas album, Mandy reached for some of the arrangers and players who recorded the original, beloved versions of holiday classics such as 'Jingle Bell Rock.' The result is her latest holiday collection, 'Winter Wonderland,' a project she dubs a "fun, festive, countrypolitan kind of record." The Boot recently sat down with Mandy to chat about the hectic recording schedule for this project, her Christmas plans with her family and her love of meringue pies of every shape and size at the holidays.

Is it true that the Nashville flood somewhat inadvertently led to your recording this holiday project?

I was supposed to do 'Always ... Patsy Cline' last summer, but the Grand Ole Opry flooded and they needed a venue to put the Opry, so it was going to be best to postpone the play. Although, we are going to do it in 2011 at the same time, June 17 through July 25. In the meantime, we got with Cracker Barrel and they needed a Christmas record -- that was the one project that they didn't have -- and it came together that way. I've always wanted to do a Christmas record, too, so it seemed like a great thing to do and a great place to do it.

How did you go about choosing the songs for this record, and why did you decide to produce it yourself?

I've been recording since I was a little kid, and you end up with a crew of people that you trust, that you are friends with and that you just work well with. It just seemed like the right thing to do, to get my friends together and make it a fun thing. I knew what I could get out of all of them, and I've always kind of been involved in production in one way or another. I've produced other people and I like it; it can be a lot of fun and really rewarding. I'm not opposed to working with other people, I like that, too, but this was a fun project to do. With Cracker Barrel you definitely want to stick with the classics, so I just picked songs that reminded me of Christmas. I love Brenda Lee, Elvis Presley, Bing Crosby and Burl Ives -- I always think of him as the snowman in Rudolph the Rednose Reindeer -- so I just picked songs that reminded me of Christmas.

Some of the musicians on the album played on the original versions of these songs back in the '60s and '70s. Did you 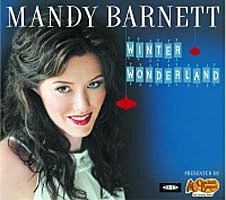 want to have them as part of it to achieve a certain type sound?

Yes, there are certain guys who you can't beat. Harold Bradley on the Stromberg guitar and Louis Nunley arranging vocals, they definitely have a distinctive sound and they're just great at what they do. I've worked with both of them for the last 10 years so it just seemed like a natural fit.

In what month did you record this? You always hear about artists having to record these projects when it's 80 degrees outside and try to create the holiday atmosphere.

It was the end of June, so it was like 110 degrees out, or something like that! In the studio, we had the air conditioning turned down, so it was very cold in there. There's not a window, so you can't see the sunshine. Once you get in there you can pretty much forget what's going on outside. I brought in some cheap little Christmas tree that the lights were shorting out on, too; we were afraid it was gonna burn the studio down! Once we got into it, we were able to keep it going, and it was Christmas all day long! We recorded it at Hilltop Studios in Madison, Tenn,, which is an older studio. It's a place I've worked many times and was just really comfortable there.

You were under a little pressure when you made this album time-wise, right?

This was something I really had to be prepared for; it wasn't something I could do loosely, so I really had to have my ducks in a row as far as what I was going to do because I had a very short time to do it. I had to record the whole album in a little over a week! It was very stressful trying to get it all done, but there were deadlines and we had to get it in at a certain point to make the deadlines. All of it came about really quickly. It was like, 'OK, we're going to do a Christmas album, well, we need it tomorrow!' I was scared, but that's why you have to get people that you know are going to deliver. Otherwise it can be a big mess! I called my engineer on a daily basis and browbeat him to work me in. I nearly worked him to death because he was booked every spare moment that he had but, bless his heart, he really did come through for me. He was booked solid at the worst point, but we just got around it and we made it work.

Tell us about the making of your 'This Time of the Year' video.

It's a really special song to me because, before Owen Bradley passed away, we made a record together. I had gone to St. Thomas Hospital with him and Buddy Harmon and Harold Bradley (part of the A Team basically) and we played a show for all the folks who had defibrillators. Several of the songs we did were ones that Owen and I had practiced and did at that show. To me, 'This Time of the Year' is the Nashville sound. It totally has that vibe. We decided to do a video, and we filmed it at the Tennessee Central Railway Museum, with David McClister directing. It's just a sweet video, basically talking about going home for the holidays and how beautiful the snow is, and that people are going to church and celebrating Christmas day; it's a very uplifting and sweet song.

Despite being able to record this holiday album with the unexpected extra time, were you disappointed that 'Always ... Patsy Cline' was postponed?

It is such a fun show, and things happen for a reason, I guess. The good news is that it's coming back next year and I'm glad we're going to get an opportunity to do it again. We wouldn't do it if it wasn't fun. I love my co-star Terri Meyer; we've always just had the best rapport and have a great time and really enjoy being with each other onstage.

You channel Patsy so perfectly but, I'm curious, do you ever feel like maybe you almost get pigeonholed because of your association with her? Or because you are so amazing at singing her songs?

I think there's been some of that here in Nashville, just because the show was here and it's become such a part of Nashville pop culture. It's something I am very proud of, and I'm honored that people think I sound like her and can channel her because she's always been a very important person to me musically. Ever since I was a little kid, I listened to her and loved her music. Of course, I love a lot of other singers, too, including Tammy Wynette, Connie Francis, Kate Smith and Linda Ronstadt. I have a lot of different influences and I also like to do a lot of jazz and the pop standards.

Who are some of the people you're listening to and liking right now?

I'm a retro type person. I don't listen to a lot of what's going on in radio now. Most of the people I listen to have been gone a long time. I think some of the greatest female singers ever were from the '40s, '50s and '60s. No matter what's going on in music or what the trends are, there's always going to be a market for beautiful, classic songs.

What are some of your favorite Christmas songs you look forward to singing every year, aside from the ones on this album?

I love a lot of the carols. I didn't put a lot of them on this album, because I definitely wanted this to be a fun, festive, countrypolitan kind of record. The songs that I picked reflect that. 'I'll Be Home For Christmas' is one of my all-time favorite Christmas songs, I love 'Marshmallow World,' 'O Holy Night' -- I didn't cut that one -- but I would like to do another Christmas record in the future and record more of my favorite Christmas songs.

Are there any on this album that you really love to sing the most?

How do you usually spend the holidays?

I go home to Crossville, Tenn. I've got a small family. I get together with my mother, my aunt and some cousins. We cook, usually on Christmas Eve, and then my mom and I have Christmas together. It's always exciting, and it's something I look forward to every year. We always get up early, open gifts, listen to music and cook breakfast. It's always a very special time.

Are you a good cook?

I love to cook! I'm good at Southern cooking. I'll make beans, cornbread, meatloaf and fried pork chops; pretty much anything that's Southern, and good, I can handle it. Meringue pies are always a favorite at the holidays in my house. I am just a sucker for pie: chocolate pie, coconut cream pie, any of those! They're just fantastic!

What's coming down the pike for you in the New Year, besides reprising your 'Always ... Patsy' role?

I'm hoping to start recording a new album. I'm playing the Grand Ole Opry -- I'm a regular on the Opry -- and I'll be playing some club gigs and touring, too. I'm going to work towards getting another record out next year.

Is it always special to you when you play the Opry?

It is. The Opry's very special to me. I started going there when I was about 10 years old with Melvin Sloane, who had the Melvin Sloane dancers. He would get me backstage, so I got to meet Roy Acuff and Dottie West and a lot of people who are no longer with us. It's just always meant a lot to me.

What about New Year's resolutions? Are you into making those for after the holidays at all?

I don't, but I am a pretty disciplined person. If I make up my mind to do something, I do it. I just don't do it on the date that everyone else might do it. I might want to do it on January 2. [laughs] It's gotta feel good!