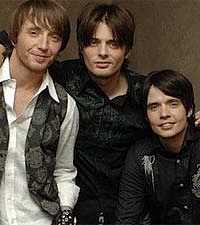 Ashley Clark has once again joined Carrie Underwood out on the road, but this time he's not standing in the corner behind the superstar. Ashley, along with brothers Austin and Adam -- collectively known as Sons of Sylvia, are in the midst of opening Carrie's Play On tour which runs through December.

Ashley first started playing fiddle and singing background vocals in Carrie's band in 2005 after her win on 'American Idol.' "To this day I still don't know how they got my number to play for Carrie," Ashley tells The Boot. "I didn't know who Carrie was or anything at the time. Next thing you know we're going on 'The Tonight Show With Jay Leno,' 'Late Show With David Letterman' and all these big shows. I was like, ' Wow ... this is crazy!"

Carrie has been supportive of the trio since the start of their new career in 2007 as The Clark Brothers, when they auditioned and won 'The Next Great American Band.' Prior to that, Ashley, Austin and Adam were involved with The Clark Family Experience with three of their other brothers. "Carrie's just been awesome," notes Ashley. "What you see is what you get with her. She's really true and fame hasn't gotten to her at all. It hasn't touched her. She's just the same person I remember when I first met her."

Sons of Sylvia released their debut album 'Revelation' in April as they continued to tour with Carrie, and they admit the tour has been nothing short of amazing. "It's the most fun, most easiest, and most wonderful thing we've ever done," Ashley says. "It really is pretty surreal. I sing a duet with her during the show, and that's really a blast, too."

Sons of Sylvia's debut single 'Love Left to Lose' is at radio now. To keep up with the brothers and their touring adventures, follow them on Twitter.