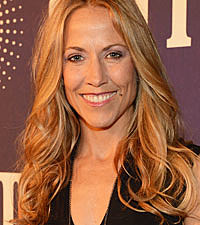 Sheryl Crow may be known as one of rock music's most successful females, but she hopes to expand her fanbase in country music. The singer-songwriter has finished her first country album, which she recorded in her barn at her home in Nashville.

"It's been really fun to make," she tells Country Weekly. "My record is probably more country than a lot of country that is getting played [on the radio], so I hope I get played."

The 50-year-old star, who has lived in Music City for seven years, says she feels perfectly at home in the genre. "I think it's the best format if you like songs as a forum -- songs that are melodic and lyric-driven," she explains. "That's what I've always loved. There isn't a home for that outside of country consistently."

The mother of two, who enlisted Brad Paisley to help with the new album, says the switch to country music isn't as much of a stretch as some might think. "I already had a pretty strong country influence in my music," she explained to the Minneapolis Star Tribune. "You listen to 'Strong Enough,' 'If It Makes You Happy' and 'Hard to Make a Stand,' there's a lot of country influence in there already, but there's just no pedal steel and no fiddle."

Sheryl's debut single from the upcoming album will be released in March.