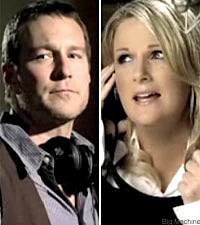 John Corbett, or 'Aiden' as 'Sex and the City' fans know him, is the object of Trisha Yearwood's affection in her new video, 'This is Me You're Talking To.' But as handsome as he is, Corbett wasn't Yearwood's first choice. When it came time to pick the part of her ex in the video, the first person who came to mind was Garth Brooks. But, Yearwood tells GAC that she was politely turned down by her hubby.

"Garth and I kind of made a pinky swear early on that we would not gratuitously use each other in videos. We just kind of want to make sure that we make it special. He didn't sing on the song. He didn't write the song, so there wasn't really a place for him," she said. "I offered him the part, but he said, 'I'm gonna pass.'"

Yearwood then quickly thought of Corbett for three very good reasons. For one, he is best known for his "nice guy" roles on 'Sex and the City' and in the blockbuster movie, 'My Big Fat Greek Wedding.' Plus, he's no stranger to the country music world, and Yearwood could definitely wear high heels around him.

"He's 6'-5", so that was important," she adds. "And I knew he made a record in Nashville. I knew he had a passion for music, and it was just one of those things where I thought, 'He could just say no. That's the worst thing that could happen.' And he was so great. He was sweet to say yes, and I think [he] made a great song an even better video."

Watch the 'This is Me You're Talking To' video below.