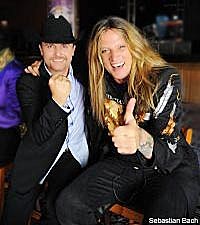 He won CMT's 'Gone Country' reality competition show last year, and now Sebastian Bach really is going country on an upcoming album. His own definition of country, that is.

"I hate to use that word 'country,' because people have a weird idea," the former Skid Row frontman explains to Noisecreep. "My idea of country is Neil Young 'Old Man,' or Allman Brothers, or Willie Nelson 'Whiskey River' and stuff like that. I like outlaw country. I like the bad ass Waylon Jennings coke country [laughs] ... Leon Russell with long hair, f---ing partying!"

While starring in 'Gone Country,' Sebastian wrote two country songs -- 'Jumping Off the Wagon' and 'Battle With the Bottle.' "There are couple of other songs, but those are the two good ones," he says. "I tried to cover all the bases in country music -- one song's about drinking, one song's about not drinking [laughs]."

The metal icon recorded the two songs with John Rich, who has since invited Sebastian to join him on stage at several solo gigs, as well as Big & Rich shows. The two plan on logging a lot more miles together in the future.

"John Rich asked me to come on a whole Canadian tour in January, tentatively," says Sebastian. "If it goes well in Edmonton, he said, 'Dude, let's take this thing across Canada -- 20 gigs, Big and Rich. You're on the bill every night, every city.' I'm like, 'You tell me when. Give me the plane ticket, and I'm there!' because I just love playing. I love playing music.

"It's just something that I never saw coming, but the one thing about country fans is they buy CDs and they go to concerts -- and that works out for me as a musician," he says. "I enjoy that feature about country."

Sebastian says he has already cut ten tracks for the new album but does not yet know when it will be released.