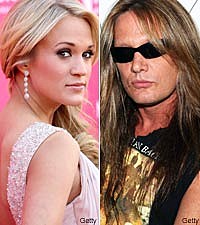 Former Skid Row frontman Sebastian Bach has certainly seen (and done!) many crazy things as part of a notorious heavy metal band. But he credits angelic country star Carrie Underwood with giving him what he says is "one of the most ironic things ever in my career!"

"Carrie Underwood, for some crazy ass reason, has made 'I Remember You' a country rock hit," Bach tells Noisecreep of Carrie's cover of the classic Skid Row hit. "She does it in her concerts -- a full production with backing vocals and string section, slide guitars ... and she does all the screams at the end."

Sebastian, who entered the country world himself by emerging as the winner in the second season of CMT's reality series, 'Gone Country,' never envisioned his band's 1990 hit as anything but a rock power ballad. "If you could have told me 20 years ago that 'I Remember You' would be a country rock staple -- which Carrie Underwood has made it, they play it on country stations along with her version of 'Home Sweet Home' by Mötley Crüe -- it's just so crazy to me."

But all perplexity aside, Sebastian has a newfound respect for country music. "The difference between rock and country now to me is, for some weird reason, rock 'n' roll seems to be this whole nostalgia trip now. I don't get it. Country, the focus is on one thing: making new music. And the only thing I love more than metal is music," he says, laughing. "I like sitting down with somebody with a guitar and coming up with a melody line and some words and recording them."

Currently working on his own country-leaning album with John Rich, Sebastian gives credit to other artists brave enough to cross genres. "There's this whole explosion in America that's going on, like Taylor Swift doing '[CMT] Crossroads' with Def Leppard. It's really no different than John Rich coming out with 'I Remember You' or 'Youth Gone Wild,'" he says.

Carrie Sings 'I Remember You' Live