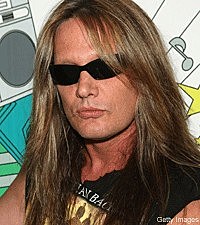 Sebastian Bach is the winner of CMT's celebreality show, 'Gone Country 2.' The former frontman of the heavy metal band Skid Row edged out fellow competitors Chris Kirkpatrick, Lorenzo Lamas, Sean Young, Jermaine Jackson and Mikalah Gordon to take the title. Show host John Rich felt it was a combination of Bach's songwriting skills and ability to communicate with his audience that gave him the ultimate advantage.

"He truly understands what makes a great country song, and his singing ability is still off the charts," Rich says of Bach. "I'm very proud of him going country!"

Bach's first country single, 'Battle of the Bottle,' has already been released to country radio. He wrote it with two of Nashville's most celebrated songwriters, Jeffrey Steele and Vicky McGehee.

"Sebastian put his real life experiences into his song," says Rich. "'Battle with the Bottle' deals with the challenges he faces in his life on a daily basis, and when your music imitates your life, that's where great country music happens."