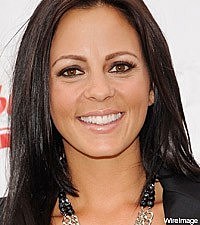 When Sara Evans took the stage last Thursday, June 10, to welcome 350 fans -- some who had spent nearly two hours standing outside in 92-degree heat to get inside Nashville's Mercy Lounge -- she didn't disappoint the people who love her.

Dressed in black leather pants and a flowing gold lamé top for her CMA Music Fest fan club party, Sara looked like she had just stepped off the cover of Vogue magazine. Her pitch-perfect voice was just as dazzling, as she sang some of her biggest hits, including 'Real Fine Place,' 'Perfect,' 'Born to Fly' and 'Suds in the Bucket,' along with some covers including 'Suspicious Minds,' by Elvis Presley and Dolly Parton's 'Jolene.'

"Oh, my gosh," Sara gushed as she greeted her fans. "It's like a family reunion. Thank you so much for being here today! I'm so excited to be having another fan club party. You don't know how much I appreciate you being here!"

Between songs, Sara gave fans a glimpse into her new life in her new home of Birmingham, Ala., where she lives with husband Jay Barker and their seven kids.

"Jay and I are about to celebrate two years of marriage on Monday," she said to the enthusiastic crowd. "I'm so excited. I cannot believe it's been two years! Literally it has flown by, but then on the other hand it's seems like I've been with him my whole entire life. He's home right now with all seven kids. He is lucky.

"We have three playing all-stars baseball right now," the proud mom and step-mom continued. "My son and his daughter and his other son. So that is an all-day, everyday thing. I was at the ballpark last night. I'm a little hoarse because I've been yelling."

After she explained that her 10-year-old son Avery is the catcher for the all-star team, Sara admitted there's some anxiety involved. "It's very stressful for me because he's involved in every single pitch that's thrown. It's a really important job. Say a little prayer for Jay because we go to Minneapolis tomorrow, and I think he has like 20 games this weekend."

Joking about the rigors of the children's schedule, she quipped, "I know. You know, he's the one that had four kids. I only had three."

The crowd hooped and hollered throughout the songbird's share-and-tell session, then quieting down as she switched the subject to something of a much more serious nature.

"A lot of things happened to me over the last three or four years. Some bad and some incredibly amazing," she said, referring to her tumultuous divorce followed by her second marriage. "I moved to Birmingham. We had to buy a new house, set up our home. I had to make all new friends and blend our children, and new schools, new church and new everything for me. So the career sort of took a back seat because of those things ... because of my personal life. And not that I didn't want to be out doing it, but I just really didn't have enough to give ... But now, the album is finished!

"I wrote almost every song," she continued. "I'm glad I took the time to do that because the album really speaks to what I've been going through, and where I'm at right now, and so I've been going crazy! It's been almost two years since I've had a single on country radio. It's about to kill me."

Sara's sense of humor kicked back in as she noted that she wrote almost all of the new songs on the album with her brother Matt. "He and I wrote many love songs together about Jay, and that is strange ... kind of disgusting. But we did grow up in Missouri!"

Sara's new song, 'Stronger,' which is going to be a part of the soundtrack for the movie 'Love Don't Let Me Down' starring Tim McGraw and Gwyneth Paltrow, was co-written by Lady Antebellum's Hillary Scott, who sang harmony with Sara on the record.

Before she ended the session with her fans, Sara brought loud laughter from the audience when said she wanted to reiterate just how much it means that her fans showed up. "You guys have seen me go through awful times. You've seen me go through great times, and I feel like I'm the happiest person on earth today. Everything is all lined up. I'll probably walk out of here and get hit by a car."

Fans can ask the most personal questions: Is she going to have another baby? "Yeah, I'll probably get knocked up," laughed Sara. "That's what'll happen. But that'll be okay. You've been with me through all of my childbirths. I just have the baby, and then I carry it out to the tour bus. All my children learned how to walk on the tour bus, and they were all potty trained on the tour bus."

When a fan hollered out that she was pregnant, Sara had a great comeback. "That's awesome!" giggled Sara. "Do you feel like crap? I mean, seriously, I would love to have a child with Jay, but I hate being pregnant. I detest being pregnant. I'm sick from morning to night, all day long...

"So I talked to my sisters: I need a surrogate ... like Sarah Jessica Parker. She was smart. She hired someone to carry her babies, and my sisters would be like: 'Oh, no! No way!!' I said I will pay you $50,000. And then they started punching each other fighting over who would do it ... But Jay is completely grossed out by that thought."

Stay tuned on that one.

Sara took some time back stage to talk to The Boot about what her fans mean to her. "They mean everything. Without them there's nothing. I haven't had a single out to radio in the last two years almost. I have these fans that follow me all over the country and come to every single show. They're anxiously waiting for the new single to come out in September but they are so loyal and sweet to me. They mean everything to me."

So Does Sara know any of her fans by name?

"Yeah. I have two fans -- a married couple that follow me pretty much everywhere I go, I would say 95 percent of appearances that I do ... I mean 'Good Morning America,' if I'm doing a little fundraiser in Birmingham, if I'm doing a huge concert, I can pretty much guarantee that they are going to be there: Ron and Brenda Karlin from Kansas City, Mo. We actually just awarded them the other night on stage with all-access passes so they can come to any show at any time, any meet and greet."

Sara's new single 'Stronger' will be released to radio on Sept. 20.