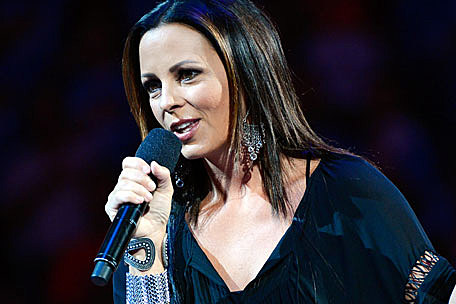 Sara Evans seems to have multi-tasking down to a fine art. The busy mom has spent much of the week promoting her upcoming AXS TV concert airing live this Sunday (Oct. 28) from Chicago as well as juggling Mom duties and working on her web series "Simply Sara."

"I have a lot of help. I'm very lucky and very blessed," Sara tells The Boot. "I have two girls in Birmingham that help me, assisting me with daily chores and tasks because my career is so demanding. I need help in those areas so I can focus on my children and my husband. They are my first priority, making sure they are cared for and fed and comfortable and all their needs are met. That's top priority for me and second comes my career."

These days all is well with both her home life (she and husband Jay Barker have a blended family of seven kids) and career. She's excited about being nominated for three honors at the upcoming American Country Awards. "I'm very, very humbled by that," Sara says. "I love that it's totally 100% fan voted and they've nominated me three times. They are so nice and so loyal and so faithful to me."

Sara fans will get a special treat this Sunday as her show airs live on AXS TV. "I'm really, really excited about it," she says. "Chicago is a great town for me to play because they have great shopping! My kids are going to be there too, so we might even go to the zoo or something. I always love performing in Chicago."

Viewers can expect to see Sara perform her best-loved hits as well as a few surprises. "We have a few cover tunes that we throw in there that are going to be a surprise," she says. "It's going to be neat because I've never had a whole concert on television before."

Does the possibility make her a tad nervous? "When I get on stage I think that I won't actually think about it," she insists. "I've been on stage since I was four and there's something that just clicks with me when I hit the stage. I might be nervous before, but when I get up there, it will all be good. My band is like family to me and I'm so comfortable with them up there. My brother is in my band. He's my bass player, so we'll just get up there and have fun like we always do."

Even off stage, Sara finds a way to share her life with her fans via her "Simply Sara" webisodes. "I'm such a ham," she says with a laugh. "I've been recording albums for RCA records for 13 or 14 years now, so I think you get to a point where you want to branch out and do different things. These webisodes just started six months to a year ago. We hired a girl to come and just film me non-stop. Every time I'm on the road, every time I'm working, she's filming me and my stylist. Kaylen Evans is like my partner in crime with these webisodes because she is hilarious and she does my hair/makeup and wardrobe. She's been with me for 11 years and she is married to my brother, Matt, who is my bass player. We're all a big family on the road, so we decided we've got to start having these webisodes come out every week because they are so funny and are a chance for me to show my fans a whole other side of me that they don't get to see in the videos or on the award shows or even in concerts."

Sara is having a blast with her online endeavor. "It has been the funnest thing I've ever done in my career," she grins. "They are great about editing them together and just making them funny. I love for the fans to be able to see the crazy, crazy side of me ... They're probably surprised to really discover how just silly I am and how willing I am to be crazy and funny and not worry about embarrassing myself. I'm such a kid at heart and I'm really sort of a comedian at heart. I love to be funny and make people laugh. When I'm at a party or when I'm with my family, I love to be the one telling a story and just being loud and crazy, so I wanted to find a way to share that with the fans."

Sara's fans will also be happy to know she's getting ready to go in the studio and record the follow up to her 2011 album Stronger. "I've been writing for about six months and getting tons of songs sent to me from Nashville. We are going into the studio November 7th and we're going to start recording the new album," Sara says, adding that she'll be working with producer Mark Bright, with whom she recorded her 2005 album, Real Fine Place. Mark also produces Carrie Underwood, Scotty McCreery and others.

"I love that process," Sara says. "It's so much fun. I love being in the studio. I love just the whole creative aspect of knowing what the song is when you're going in, but you really have no idea how it's going to turn out in the end. It's great."

Watch our full interview with Sara Evans below, and check out the latest "Simply Sara" webisode here.