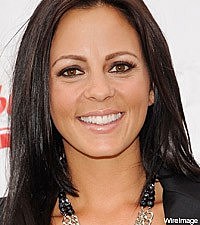 Sara Evans was at Davis-Kidd bookstore in Nashville Monday night to celebrate the release of her first novel, 'The Sweet By and By.' The inspirational book is about a woman who feels the need to re-connect with her hippie mom and eccentric sister, and the hope at reconciling her past with the impending future.

"The book is about a girl named Jade ... and she grew up on a farm in Iowa. And she is a lot like me, but this is not an autobiography," Sara explains. "She has a lot of similarities to me, and her life has a lot of similarities to my life. She is engaged to be married to a very wealthy, prominent lawyer in Chattanooga. And as she's looking at her wedding invitations, she's trying to decide if she's going to send her mother one, and that's kind of where the whole thing starts. And the book is basically telling you why, and what is the deal with her mom, and what is the relationship that she has with her dad? So, this sets up all these struggles that she has had in her life, and all the things that she's had to overcome, and the pain that she's come through."

While she and Jade are similar in some ways, Sara clarifies even further to explain what they don't have in common. "There are lots of similarities with her life and my life, but not the mom thing and not the abortion. I never had an abortion," she states. "But her mom is like a hippie and she abandoned her and her siblings and she was married like four times, not a good mother at all. So, that is not my mom at all. But I wanted it to be like that so she'd have to deal with her mother, because we all have to deal with our mothers. So, there needed to be a reason that she had to deal with her mom and reconcile this relationship."

'The Sweet By and By' is the first of four in the what's being called the Songbird Series, and Sara says she's already finished the second one. "The second book [titled 'Softly and Tenderly'] is even better because that's kind of when everything explodes into full-force drama!" she exclaims.

Sara is expected to make more bookstore appearances across the country in the coming weeks.