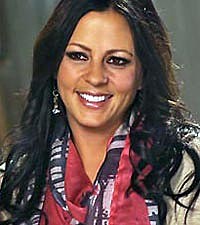 Sean Green for The Boot

Sara Evans' 'A Little Bit Stronger' remains at the top of both of the Mediabase/Country Aircheck and the Billboard country singles charts for a second week in a row. Miranda Lambert's 'Heart Like Mine' holds steady at No. 2 on both charts, followed by Brad Paisley's 'Old Alabama,' which climbs to No. 3.

Sara's fans have connected with the chart-topping song in such a personal and emotional way.

"That's what I love about this song, because I think you want to listen to it over and over and over and hear how she is," explains Sara. "Basically the first line of the song is that I woke up and all I did today was brush my teeth, but that was good for me because I'm getting a little bit stronger -- at least I got out of bed."

After taking a few years off, Sara is a bit stunned by the song's success. "I am so humbled and overwhelmed that 'A Little Bit Stronger' made it to No. 1," the songstress notes. "This song has had the biggest emotional response of any other single I've ever released. I think it is because almost everyone has gone through a difficult time in their life and most people can relate to the line in the song 'even on my weakest days, I get a little bit stronger.'"

Lady Antebellum's Hillary Scott co-wrote the song with hit tunesmiths Luke Laird and Hillary Lindsey, about the breakup and aftermath of a previous relationship.

Sara will most likely serve up her latest No. 1 single, 'A Little Bit Stronger,' when she appears on CMT's Disaster Relief Concert Thursday, May 12. The 90-minute live concert special will air at 9:00 PM ET on CMT, and will also feature performances by Hank Williams, Jr., Tim McGraw, Alan Jackson, Keith Urban, Lady Antebellum and Ronnie Dunn. All proceeds will benefit the American Red Cross Disaster Relief efforts.