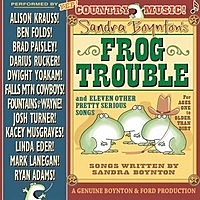 Boynton is best known as a humorist and children's author, but she's also released five albums with composer Michal Ford that she terms "renegade children's music." Three of them have gone Gold, and she's made a habit of working with an eclectic assortment of guest stars including Steve Lawrence and Eydie Gorme, Blues Traveler, Kevin Kline, Meryl Streep, Sha Na Na and many more. She received a Grammy nomination in 2003 for 'Philadelphia Chickens.'

According to a press release, "It's truly an album for everyone - or, as the cover says, 'For ages one to older than dirt.'"

'Frog Trouble' is slated for release on Sept. 3 via Warner Music Nashville.