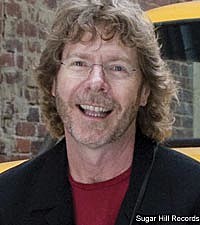 In September, Sam Bush was awarded the Americana Music Association's Lifetime Achievement for Instrumentalist. No one was more surprised that the multi-talented Sam himself.

Sam, who first came to prominence in the 1970s as a member of the genre-bending New Grass Revival, is releasing his seventh solo album, 'Circles Around Me,' a mixture of familiar bluegrass tunes and several new songs. "I don't know why, but it felt right at this moment in my life to go back and revisit some things that I've loved all my life, which is bluegrass and, unapologetically, newgrass. After all these years of experimenting -- and there's experimentation on this record too -- I've come full circle."

'Circles Around Me' features such powerhouse instrumentalists as Del McCoury, Edgar Meyer, Jerry Douglas and New Grass Revival co-founder Courtney Johnson, who is featured posthumously. Sam says the title track, which he co-wrote with Jeff Black, "is about being thankful that you're still here, that you're still alive walking around. Why are we the ones still here when we've had fallen comrades and loved ones?"

Also featured is 'The Ballad of Stringbean and Estelle,' which Sam co-wrote with Guy Clark and Verlon Thompson. The haunting tune tells the tragic real-life story of the 1973 murder of Grand Ole Opry star David "Stringbean" Akeman and his wife.

New Grass Revival producer Garth Fundis discovered a previously unreleased fiddle and banjo recording with Sam and Courtney Johnson (who died in 1996) and restored the 1976 version of 'Apple Blossom,' adding new parts to it. "It's pretty special and it means a lot to me," says Sam. "It reminds me how much I loved Courtney's playing."

While most of today's young mandolin pickers owe Sam Bush a debt of gratitude, he's hardly ready to relinquish his crown as the King of Newgrass. "It's crazy to think about," he says, "I'm proud to be part of a natural progression in music. But I hope to still be playing 30 years from now."

'Circles Around Me' is available now.