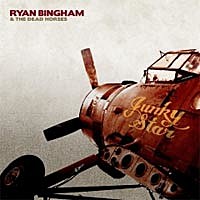 Ryan Bingham and The Dead Horses will release their new album, 'Junky Star,' on Sept. 7. It's a dream-team project, as the alt-country sensation enlisted his fellow Oscar-winner T-Bone Burnett to produce. The two paired up for this album on the heels of their successful artistic partnership on the Oscar and Golden Globe winning song, 'The Weary Kind (Theme From 'Crazy Heart').'

This album is also something of a personal dream come true for Ryan -- a former rodeo rider in New Mexico and Texas -- who built his music career after teaching himself to play guitar, self producing CDs and driving from town to town looking for gigs.

"I would write the songs in the back seat of the truck, go to the rodeo, talk to the bar owner, and then get my guitar out and play," he told The Boot. "I used to wonder if there would be anybody there at all to hear my music."

All 12 tracks on 'Junky Star' were written by Ryan and showcase a diversity of influence, from classic rock to blues, folk to outlaw country.

Ryan is currently on the road with the Country Throwdown tour. For cities and dates, check the tour's official website.