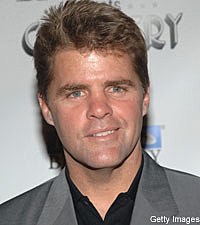 The running theme when you talk to Richie McDonald, former lead singer of Lonestar, is that he wants to be doing music that matters and performing songs that touch people's lives.

McDonald was certainly touching lives the past couple days as he hosted Celebration 2008, a first-time event that paired the Nashville business community with Nashville celebrities to raise money for Feed the Children and the Minnie Pearl Foundation. Monday's event was the largest non-catastrophe Feed the Children food-drop in any American city outside of New York.

Tuesday's golf tournament paired celebrities from sports and music with Nashville businessmen and women. And to cap it off last night, McDonald and some of his close friends, including Joe Nichols, Steve Azar, Jake Owen and Billy Dean (pictured on right with McDonald) jammed at The Cadillac Ranch to a room full of fans and new business associates.

All of these activities fit right in with Richie's new inspirational disc, 'I Turn To You.' The singer explains that after he left Lonestar last year, he got a phone call from someone asking him if he would consider recording a gospel or Christian album.

"It was something I had wanted to do but it just never seemed the right time," McDonald says.

He was thrilled with the opportunity to record the project and immediately went in the studio with longtime co-writer and friend Frank Myers. The result is a powerful album of songs that, as Richie had hoped, should make a difference with those who hear them.

McDonald will introduce some of the songs from the album on a special edition of the Grand Ole Opry on April 22. The performance will be during Gospel Music Week, a seven-day celebration of the gospel music industry in Nashville that culminates with the Dove Awards. It will be Richie's first time to play the Opry as a solo artist, and he says he can't think of a better place to play his new music.

Richie McDonald's 'I Turn To You' CD is due to hit stores June 3.