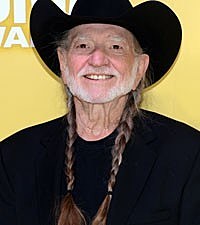 Willie Nelson's Let's Face the Music and Dance album hit stores today (April 16), and the country legend is already in the final stages of recording his next album! Willie, who turns 80 later this month, reveals his next project will be all duets, featuring guest vocals by Barbra Streisand, Loretta Lynn, Rosanne Cash, Alison Krauss, Norah Jones and Miranda Lambert. A title and release date are pending. [Exclaim]

Tabloids and tweens all over the world are dying to know if Miley Cyrus and Liam Hemsworth will ever tie the knot. And the truth is, even Miley's own father doesn't know. When discussing his new autobiography, "Hillbilly Heart," Billy Ray Cyrus admits he didn't write much about his 20-year-old daughter's engagement, as he's not totally sure they'll walk down the aisle. "As I was writing the book, I wanted to keep that particular moment as open-ended as possible," explains the country singer. "I didn't know the answer. They're young. They're kids ... I don't know. I play it by ear and I know whatever is meant to be, that's the way it's going to happen." [ABC News]

Tate Stevens, season two champ on FOX's "The X Factor," will release his self-titled debut album on April 23, but he already has another first to celebrate. The Missouri native is being immortalized on the 160' City of Belton water tower, freshly painted with "Home of Tate Stevens, Live the Dream!" The water tower, located near his home off Interstate 49, will be formally dedicated on April 22, with Tate in attendance. "The support I've felt from the community is incredible," says Tate, "and I hope I can continue to make them proud. I'm so incredibly humbled by this honor."

Taylor Swift is expanding her shoe line. The music superstar is already affiliated with Keds, having released a special "Red" shoe in conjunction with her album of the same last year. Now, she has launched an entire line with Keds Champion Sneakers, featuring casual shoes with prints including polka dots, paw prints, hearts and stars. Some pairs come with a guitar pick charm. [Keds]

Just in time for the band's 20th anniversary, Lonestar's new album, Life As We Know It will hit stores June 4. The new set of tunes mark the lauded group's first full-length album in more than three years and the first since the return of original lead singer, Richie McDonald. The project's current single is "Maybe Someday." Watch the song's video here.

A lot of great music has been featured on the hit ABC drama, "Nashville," since the show released its first soundtrack. So, they're doing it again. Nashville's Big Machine Records will release "The Music of Nashville: Season 1, Volume 2" on May 7. Among the tracks are Lennon and Maisy Stella's charming version of the Lumineers' "Ho Hey," along with songs performed Connie Britton, Hayden Panettiere, Jonathan Jackson, Clare Bowen and Sam Palladio. [Country Music Is Love]