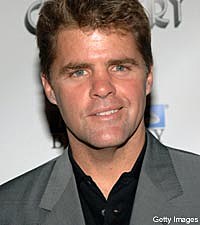 In what was one of country music's biggest news stories of 2009, Brooks & Dunn announced they'll be calling it quits after their Last Rodeo tour in 2010, saying goodbye to millions of loyal fans before heading off into the sunset as solo artists.

Richie McDonald, who shared the stage with Lonestar as lead singer for 14 years, feels their pain. He speaks candidly with The Boot about his difficult decision to leave the group in 2007, and offers his thoughts on the dynamic duo's split.

"I think after [so many years] we kind of reached our pinnacle," says Richie of his tenure with Lonestar. "We had all this success, and we were coming back down the other side of the mountain. And as radio starts to be a little more difficult to play your songs, because new talent comes along and the playlists are getting shorter and shorter, I just thought it was a good time for me to leave. We parted ways with our record label. It was about 12 wonderful years at that label, and I just thought it was a great way to go out ... gracefully. It was just time to do new things for me -- go record music that I had been wanting to record -- and also continuing where my roots are in country music."

Richie says he was also looking forward to slowing down to spend a little more time with his family, and to "be a little more picky" in his career choices. "If I needed to be home for something, I could be home for that. I slowed down a little bit but at the same time, this next year, I hope to gear up and get back out there."

In terms of announcing his decision to go solo, Richie says he thinks the other Lonestar members already knew it was coming. "They felt I had been thinking about it. We didn't communicate the way that we did over the years towards the end. I just kind of became a loner out there and kind of kept to myself and just had a lot of things to think about. When we had the meeting ... I'll never forget sitting down with our manager at the time and saying we had to make a decision about what we're going to do. I [said], 'To save a lengthy discussion, I'll just tell you that I feel like it's a good place for me to hop off the bandwagon.' I think they probably weren't happy with my decision, but those guys have families to take care of and to support, and where there's a will, there's a way. They've got a new lead singer, and they're out there, and they're still doing it."

By giving the group eight months notice so they could finish out the year and fulfill the dates they had on the books, the singer says things couldn't help but be a bit uneasy from time to time. "There was a little tension, but we made the best of it. We were still cordial to one another. We did the shows every night. Yeah, it was awkward."

So, what advice does someone who's been through the experience have for Kix Brooks and Ronnie Dunn as their time to part ways grows near?

"None," the solo star says without hesitation. "They don't need advice. They have it figured out. Those guys have been part of the most successful duo in country music of all time. I think they deserve to do what they're doing. They've got it probably well figured out. They're very successful businessmen, great songwriters and I think both of them as individual solo artists will do fine. Will country music play their music? Who knows? But there's always an outlet, I think, for their music as well ... for Ronnie and for Kix. I don't think I could find the words to give Brooks and Dunn any advice because I think I would be asking advice from them!"

Lonestar, by the way, also featured another singer who went solo, joined a duo, then embarked on solo projects again: John Rich.