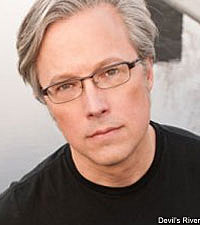 Darius Rucker summed up the feelings of most of the people who turned out to help singer/songwriter Radney Foster celebrate his 50th birthday Monday night when he told The Boot, "For me, being anywhere with Radney is awesome."

Darius was just one of many artists who came out to sing with the Texas performer, who held the party at Nashville's historic Exit/In nightclub. Joining Radney onstage throughout the evening were Dierks Bentley, Vince Gill, Lee Roy Parnell, the Randy Rogers Band and a host of other singers, songwriters and musicians. The show was a combination of old tunes and new songs from Radney's upcoming 'Revival' album, due in stores September 1.

Former duet partner Bill Lloyd shared the stage with Radney on a few numbers, notably their first hit single, 'Crazy Over You.' Foster & Lloyd were the first duo in country music history to have a No. 1 hit with their debut single, topping the charts back in 1987.

"This is my idol," Darius said when taking the stage for the first time to sing 'Louisiana Blue' with Radney. Dierks told the crowd it was an honor to be onstage with the singer, who had introduced him as "one of my new good friends." The evening was filled with stories, laughter and a few tears. When Marc Broussard joined Radney on stage, he said, "This song makes me cry," before tearing up while singing 'Godspeed' with his friend.

When introducing the hit he wrote for Sara Evans, 'Real Fine Place To Start,' Radney recalled Sara calling him to write with her for an upcoming album. "She didn't record one song that we wrote," he informed the audience, pausing slightly before adding, "but she did have a multiple week No. 1 hit with this one that George Lucas and I wrote! Plus she named the album after it."

Other special guest performers at Radney's bash included Jon Randall, Jessie Alexander, Sam Bush, and Radney's son, Julian Foster. Near the end of the night, Radney introduced his hit song, 'Texas in 1880,' by saying, "This is a rodeo song, but it's really a song about dreamers. Tonight you have made my dream come true."