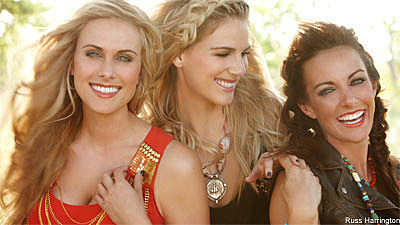 Lady Antebellum, Dixie Chicks, Martina McBride, Sara Evans and Big & Rich are some of the most successful acts in country music. And there's one person they all have in common -- the man who discovered and developed them. He's Grammy-winning record producer, Paul Worley. And now the renowned record executive has launched his own label, Skyville Records.

First up on Skyville Records is a trio called Stealing Angels. The gorgeous threesome's debut single, 'He Better Be Dead,' hits radio July 12. The girls -- Caroline Cutbirth, Jennifer Wayne and Tayla Lynn -- are currently playing fairs and festivals around the country this summer and are also in the midst of a national radio tour, coordinated by Nine North Records, which hints on their website that the Skyville chief might even be joining the trio on their radio tour to play guitar for them.

"This label is a natural extension of the artist development that we have always done," Worley proudly explains. "It makes more sense now than ever, as the music industry must create new ways of doing business."

Partnering with Worley in the creation and development of Skyville Records are Wally Wilson and Glen Morgan -- who six years ago, formed Skyline Music Publishing with Worley. Wilson is a Grammy-nominated record producer, music publisher and songwriter. Morgan, who co-founded a prominent law firm in Beaumont, Texas, has worked with both Worley and Wilson in a business management role over the years.