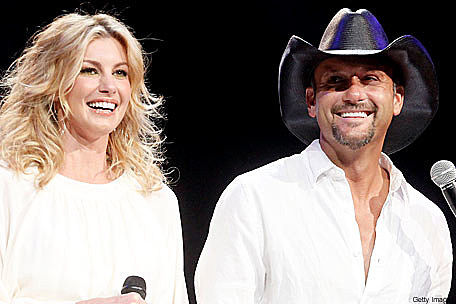 Tuesday night's Nashville Rising benefit concert was all about forgetting troubles for a few hours and reveling in the soothing stream of music that flowed from the stage of downtown Music City's Bridgestone Arena. A cross-section of artists -- country, gospel and rock -- took to the stage to help raise funds for the victims of the devastating floods that hit the Nashville area at the end of May. Lives were lost, many homes were lost and others badly damaged, as the waters of the Cumberland River and area creeks rose to levels not seen in Nashville in at least 30 years.

Organized by Tim McGraw and Faith Hill, Nashville Rising saw entertainers including Taylor Swift, ZZ Top, Carrie Underwood, Blake Shelton, Jason Aldean, Michael W. Smith, Toby Keith, Billy Ray Cyrus, Miley Cyrus, Luke Bryan, Julie Roberts, Martina McBride, LeAnn Rimes, Montgomery Gentry, Miranda Lambert and Amy Grant share the stage in their effort to help those in need. Throughout the night, artists continually told the audience that they were just singers, but it was the audience who bought the tickets to raise the money to help those in need.

"Nashville will rise, and that is why we have come together tonight," said Faith as she took the stage, the audience erupting in thunderous applause. 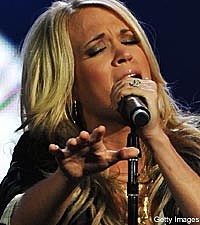 The first two acts set the tone for the night. Carrie Underwood earned the first standing ovation after rocking out to her new single, 'Undo It,' along with a medley of her first No. 1, 'Jesus, Take the Wheel,' and the gospel classic, 'How Great Thou Art.'

Blake Shelton was his usual irreverent self in recalling when he first heard about the flood. "We were watching all these images on the bus while we were waiting for our show to start," he recalled. "Then we went into the venue and somebody asked me if I knew what was going on in Nashville. I told them yes and they asked what all those 'rednecks' in Nashville were gonna do. I told them they didn't know Nashville very well because there weren't any rednecks in Nashville."

Pausing for effect, Blake then continued, "I told them this town was full of hillbillies!" He then broke into his hit single, 'Hillbilly Bone,' welcoming surprise guest Trace Adkins to the stage to join in on their ACM and CMA-winning duet.

"It's good to be with you guys here tonight," LeAnn Rimes said when she came out. "To see a community pull together the way you have has been incredible. Maybe we can help you get your mind off of it all for this evening."

After singing a rocking version of her new single 'Swingin',' LeAnn introducing her song 'What I Cannot Change.' "I know many of you are facing adversity tonight, and it's hard to accept the things you cannot change. That's why I thought this song was particularly appropriate tonight."

"It's great when a town comes together like this," shouted Eddie Montgomery, as he and singing partner Troy Gentry of Montgomery Gentry bounded on stage for their part in the show. He was met with a roar of approval when he added, "This is the greatest country in the world" before they launched into their hit, 'My Town.'

Throughout the night, videos from other celebrities who could not be in Nashville for the event played between performances. Everyone from Nashville native Reese Witherspoon to Dolly Parton, Matthew McConaughey and Craig Ferguson sent best wishes and hope for a quick recovery.

"I guess you know I'm from Nashville," Reese began her video, continuing, "In Tennessee, we get together and we take care of each other. Tonight is a great example of us doing that, and I wish everyone the best."

Dolly said she was proud of everyone in Nashville for stepping up and taking charge after the flood. "Caring for our fellow man is not just a good thing, it's necessary," said the iconic entertainer. "I'm proud to say that the water did not get high enough to dampen our spirits."

Michael W. Smith called it an amazing event, pointing out to the full house, "There will never be another night like this one in Nashville, so understand that you are helping make history in Music City this evening." Before singing 'Bridge Over Troubled Water,' the singer explained, "I recorded this song about five years ago but I've never sung it in public. I thought it was appropriate for this show tonight."

Amy Grant recounted stories about people she met while she was helping work on some of the homes that had to have work done on them immediately after the flood. "I met a lady named Nikki who once lived in Nashville but had moved to San Francisco. She said she watched the news about the flood for a few days, then bought a ticket and flew to Nashville to help in the cleanup. By the third day in town, she said she had a job interview scheduled and hoped to move back here."

Luke Bryan, who came to do his part despite having a sick child at home, received a great welcome from the crowd. He told the audience, "It's an honor and privilege to take part in this event, and be on the same stage with some of the legends and people that I look up to. I appreciate y'all coming out tonight. We've got Nashville rockin'!"

There seemed to be no age barriers in the audience, as young girls, teenage boys, their parents and grandparents filled the seats of the arena.The younger girls must have been especially thrilled to have Taylor Swift and Miley Cyrus performing on the same stage in the same night. 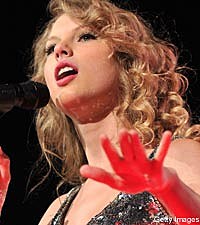 "I am honored that Tim and Faith asked me to be a part of this night," Taylor exclaimed. "You are my friends and neighbors and the people I love most in this world."

Miley bounded onstage, telling the crowd, "I was looking for a a good excuse to come come so thanks for letting me be a part of this tonight," she said. She performed only one song, the country crossover hit, 'The Climb.' Her dad, Billy Ray Cyrus, also did only one tune, 'Could Have Been Me.'

Martina McBride said she feels blessed to live in Nashville and was honored to be included in the evening's concert before performing a medley of 'Love's the Only House' and 'Blessed.' "This song is about hope, love, and dreams coming true, and that's the way I feel about this town," Martina said in introducing her hit 'Anyway.'

Nancy O' Dell of 'Access Hollywood' is a huge supporter and fan of country music. She was in town to help emcee the part of the festivities where sponsors came forward to announce the money they were donating to Nashville Rising. "Nashville is one of my favorite places to go," Nancy said. "You have so many people here who are so talented and so real, it's a pleasure to visit with you. Faith and Tim are like that, and I love spending time with them."

ZZ Top brought a bit of Texas attitude to the stage, performing their hits 'Sharp Dressed Man' and 'La Grange.' They acknowledged the audience after receiving one of the biggest ovations of the night. "We do things big in Texas but tonight's gathering is really big."

Toby Keith is another singer who does not live in Nashville, yet he has band members who do, and several of them lost tiier homes to the flood waters. He came out to support the event, performing 'Good as I Once Was' and 'I Love This Bar.'

One artist who did lose their home was Julie Roberts. The blonde beauty and her mom had to be rescued from the roof of their Nashville home, and Julie hurt her ankle while getting into a boat. She came onstage Tuesday with a bandage still on her ankle, telling the crowd, "I put on heels for y'all. This is the first time I've worn heels in a couple of months."

"Nashville is the house that built what I do," Miranda Lambert announced during her set. She performed her first two No. 1 hits, 'White Liar' and 'The House That Built Me. "

Another artist who received a huge reception was Jason Aldean, who came on after Miranda. "I don't know how to follow that," the singer said after arriving onstage, "except to do a song about all the things I love, like farm machinery and dogs." He then launched into 'Big Green Tractor,' and followed that up with 'She's Country,' inviting the audience to sing along if they knew the lyrics. Most of them did. 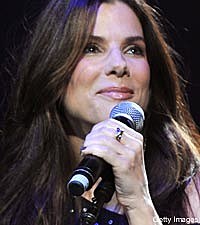 Actress Sandra Bullock was the surprise of the evening. She came out with an acoustic guitar, announcing to the screaming crowd, "I'm going to bring the house down. And I'm going to do it Nashville style!"

The Oscar winner then strummed the first few notes of Deep Purple's 'Smoke on the Water,' before admitting, "I can't play!" She instead let her 'Blind Side' co-star Tim McGraw and his superstar wife Faith Hill take the mic for their final numbers. "They say a community is only as strong as its weakest link, and from what I've seen here tonight there is no weak link in Nashville," said Sandra before introducing her friends. "Nashville has taught this country a lesson."

"I love this town, and anyone who visits here says we have the best people in the world, so generous and so gracious," Faith said as she took to the stage to perform 'Stronger' and 'Piece of My Heart.'

After asserting that he couldn't follow his wife's performance, Tim closed the show with two of his classic hits, 'Live Like You Were Dying' and 'Southern Voice.' He and Faith thanked the audience numerous times for buying the tickets to make the event possible.

As the crowd left the arena, there was still an air of excitement and hope that went with them. Hopefully it will find its way to the people who continue to build back after the tragic floods. Tim promised to make an announcement with the grand total amount of money raised from Nashville Rising sometime Wednesday. It was estimated that the event brought in almost three million dollars for the Community Foundation of Middle Tennessee, which will distribute the funds to non-profit organizations in the area.

If you couldn't make it to the show, you can still help Nashville flood victims by texting the word 'RISING' to 501501, to make a $10 donation. 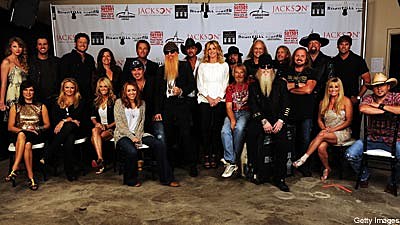 Video filmed and edited by Bill Vincent. All still images in video provided by the Associated Press and Getty Images.